A Microfluidic Platform for Nanocomposite Films 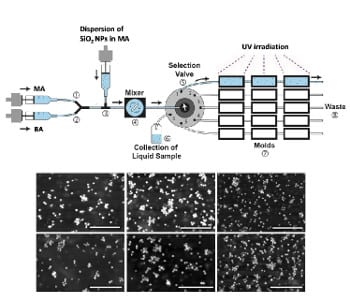 Dispersions of nanoparticles are extensively used for the fabrication of polymer-based nanocomposite materials with a broad range of applications, including electronics, optics, food packaging, antimicrobial and anticorrosion coatings, and self-healing materials. The performance of such materials is greatly determined by a multitude of experimental variables, e.g., nanoparticle size, shape, surface chemistry and concentration in the precursor dispersion and their interactions with a solvent, to name just a few variables. Due to a great number of potentially coupled experimental variables, optimization of formulations of nanoparticle dispersions and corresponding films is often conducted in a trial-and-error manner and is a time- and labor-consuming process.

Recently, microfluidic exploratory platforms have shown great promise in materials science, due to the capability to vary the composition of multicomponent systems in a high-throughput manner, the use of small sample volumes, the reduced variability between the experiments, and the ability to parallelize several screening processes. Researchers from the University of Toronto and CABOT Corporation have developed a microfludic platform for high-throughput preparation of multicomponent photopolymerized nanocomposite films from nanoparticle dispersions in monomer mixtures. Accurate, rapid and reproducible preparation of nanoparticle dispersions and multicomponent films with pre-determined compositions was achieved by tuning the relative flow rates of the comonomer and nanoparticle-monomer mixtures.

As an exemplary system, the research team used dispersions of hydrophobically modified silica nanoparticles in methyl acrylate/butyl acrylate/photoinitiator mixtures. Subsequent characterization of the properties and structure of the composite films revealed a strong effect of nanoparticle interactions with the poly(butyl acrylate) component of the films. 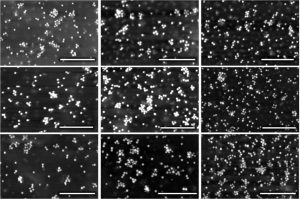 In addition to high-throughput preparation of nanocomposite photopolymerized films, other benefits of the microfluidic exploratory platform included suppressed monomer evaporation during film preparation, polymerization of the monomer mixture with no need of an inert atmosphere, and the reduced human exposure to potentially harmful monomers and/or nanoparticles. The results of this work are important in fundamental studies and in labor-and time-efficient optimization of formulations of nanoparticle dispersions for the fabrication of multicomponent nanocomposite films.

Microgel system for souped-up protein synthesis
The Promise and Challenges of Nanomedicines in Fighting Cancer
How can bioinspired nanofibers regenerate skin and aid wound healing?
Resolving the wiring issues in printed electronics