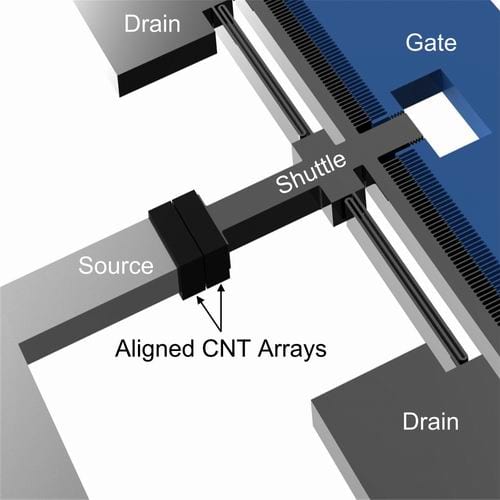 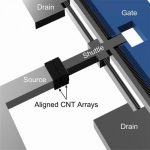 Micro- and nanosized mechanical switches are used in all sorts of nano- and micromechanical systems (NEMS and MEMS) that can be applied in all areas of electronics, from cars to personal computers. But such switches are currently not very reliable and can fail easily, by routes such as sticking, electric shorts resulting in welding, and surface degradation with use. More reliable switches with longer lifetimes are needed to make long-lived electronic devices.

Now, Jongbaeg Kim and colleagues at Yonsei University, South Korea, have produced an extremely reliable micromechanical contact based on aligned carbon-nanotube (CNT) arrays. Carbon nanotubes are known for their remarkable mechanical properties, and have been subject to intense research in recent years.

The researchers synthesize the CNT arrays directly on a set of electrodes, and the arrays can be adjusted and simultaneously preloaded during the synthetic process, to make intimate micromechanical contact. The CNTs are grown by depositing a vapor of the nanotubes onto the silicon substrate, in a gap between the electrodes. Because the CNT switch keeps on growing even when the gap is filled, this produces a force which is like preloading a spring.

Kim believes that the switches can now be used in a multitude of micro- and macrosized applications, especially those that require stable electrical current delivery.

X-ray fingerprints of novel photocathode materials: A new route for theory and experiment to join ha...
A rose garden on titanium surfaces
Printing liquid metals: The next generation of wiring
Flexible Batteries for Bendable Devices