New type of lens bends and focuses ultraviolet light in such an unusual way that it can create ghostly, 3D images of objects that float in free space. 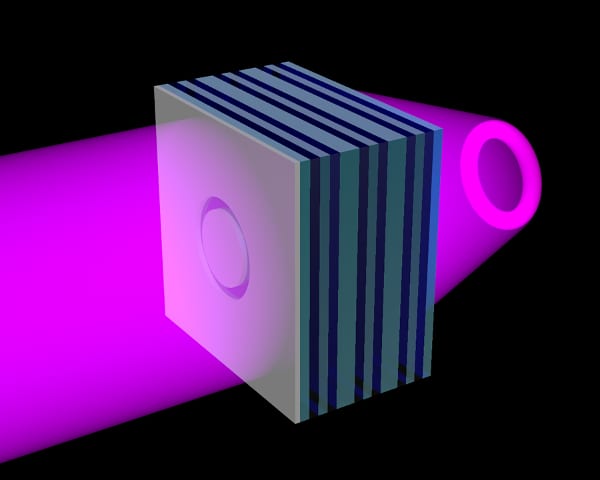 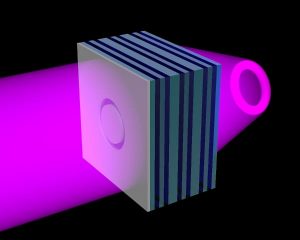 A NIST team has created an ultraviolet (UV) metamaterial formed of alternating nanolayers of silver (green) and titanium dioxide (blue). The metamaterial has an angle-independent negative refractive index, enabling it to act as a flat lens. When illuminated with UV light (purple) a sample object of any shape placed on the flat slab of metamaterial is projected as a three-dimensional image in free space on the other side of the slab. Here a ring-shaped opening in an opaque sheet on the left of the slab is replicated in light on the right. Bottom left: Scanning electron micrograph of a ring-shaped opening in a chromium sheet located on the surface of a flat slab of metamaterial. Bottom right: Optical micrograph of the image projected beyond the slab under UV illumination, demonstrating that the metamaterial slab acts as a flat lens. Image: Lezec/NIST.

For the first time, scientists working at the National Institute of Standards and Technology (NIST) have demonstrated a new type of lens that bends and focuses ultraviolet (UV) light in such an unusual way that it can create ghostly, 3D images of objects that float in free space. The easy-to-build lens could lead to improved photolithography, nanoscale manipulation and manufacturing, and even high-resolution three-dimensional imaging, as well as a number of as-yet-unimagined applications in a diverse range of fields.

An article published in the journal Nature explains that the new lens is formed from a flat slab of metamaterial with special characteristics that cause light to flow backward—a counterintuitive situation in which waves and energy travel in opposite directions, creating a negative refractive index.

Naturally occurring materials such as air or water have a positive refractive index. You can see this when you put a straw into a glass of water and look at it from the side. The straw appears bent and broken as a result of the change in index of refraction between air, which has an index of 1, and water, which has an index of about 1.33. Because the refractive indices are both positive, the portion of the straw immersed in the water appears bent forward with respect to the portion in air.

The negative refractive index of metamaterials causes light entering or exiting the material to bend in a direction opposite what would occur in almost all other materials. For instance, if we looked at our straw placed in a glass filled with a negative-index material, the immersed portion would appear to bend backward, completely unlike the way we’re used to light behaving.

A negative-index flat lens like this has also been predicted to enable the transfer of image details substantially smaller than the wavelength of light and create higher-resolution images than are possible with lenses made of positive-index materials such as glass.

It took over 30 years from Veselago’s prediction for scientists to create a negative-index material in the form of metamaterials, which are engineered on a subwavelength scale. For the past decade, scientists have made metamaterials that work at microwave, infrared and visible wavelengths by fabricating repeating metallic patterns on flat substrates. However, the smaller the wavelength of light scientists want to manipulate, the smaller these features need to be, which makes fabricating the structures an increasingly difficult task. Until now, making metamaterials that work in the UV has been impossible because it required making structures with features as small as 10 nanometers, or 10 billionths of a meter.

Moreover, because of limitations inherent in their design, metamaterials of this type designed for infrared and visible wavelengths have, so far, been shown to impart a negative index of refraction to light that is traveling only in a certain direction, making them hard to use for imaging and other applications that rely on refracted light.

To overcome these problems, researchers working at NIST took inspiration from a theoretical metamaterial design recently proposed by a group at the FOM Institute for Atomic and Molecular Physics in Holland. They adapted the design to work in the UV—a frequency range of particular technological interest.

According to co-authors Xu, Amit Agrawal and Henri Lezec, aside from achieving record-short wavelengths, their metamaterial lens is inherently easy to fabricate. It doesn’t rely on nanoscale patterns, but instead is a simple sandwich of alternating nanometer-thick layers of silver and titanium dioxide, the construction of which is routine. And because its unique design consists of a stack of strongly coupled waveguides sustaining backward waves, the metamaterial exhibits a negative index of refraction to incoming light regardless of its angle of travel.

This realization of a Veselago flat lens operating in the UV is the first such demonstration of a flat lens at any frequency beyond the microwave. By using other combinations of materials, it may be possible to make similarly layered metamaterials for use in other parts of the spectrum, including the visible and the infrared.

The metamaterial flat lens achieves its refractive action over a distance of about two wavelengths of UV light, about half a millionth of a meter—a focal length challenging to achieve with conventional refractive optics such as glass lenses. Furthermore, transmission through the metamaterial can be turned on and off using higher frequency light as a switch, allowing the flat lens to also act as a shutter with no moving parts.

“Our lens will offer other researchers greater flexibility for manipulating UV light at small length scales,” says Lezec. “With its high photon energies, UV light has a myriad of applications, including photochemistry, fluorescence microscopy and semiconductor manufacturing. That, and the fact that our lens is so easy to make, should encourage other researchers to explore its possibilities.”