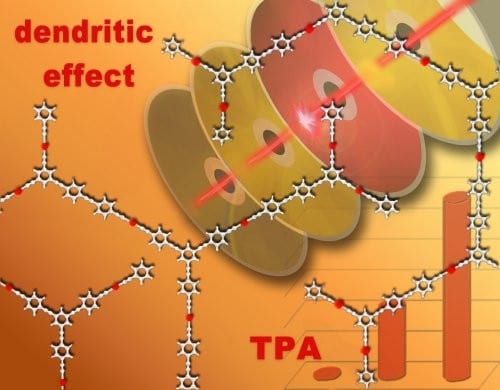 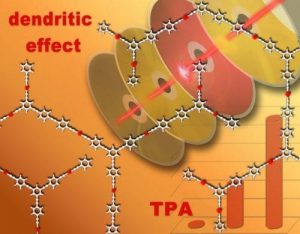 Two‐photon absorption (TPA) is of interest for optical power limiting, data storage, two‐photon microscopy, microfabrication, frequency up‐conversion lasing, and many other technologically important applications. Two‐photon processes possess many advantages over linear optical (one-photon) processes, including superior resolution, which enables precise spatial control for the various applications, together with the possibility of using infrared lasers at wavelengths that are important in biology, medicine, and telecommunications. However, whereas some general design rules for organic TPA materials have been developed, much less is known about how to make metal-containing molecules with enhanced TPA properties.

Highly efficient inorganic TPA molecules have now been reported by Humphrey’s group at the Australian National University, Canberra. The researchers synthesized dendrimers (highly branched macromolecules) with diphosphine-ligated ruthenium atoms embedded at specific sites throughout arylalkynyl organic structures, and showed that the TPA properties increased faster than the increase in molecular size as they examined larger examples.

The same group has recently shown that TPA properties in inorganic molecules can be “switched” using light, voltage, or chemicals. Taken together, these results highlight the potential of metal-containing molecules as strong contenders for TPA applications.