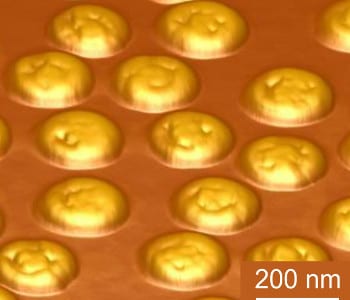 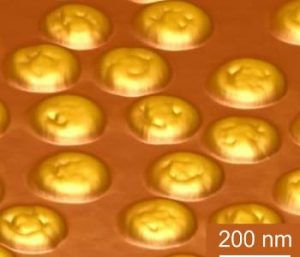 Optical elements with absorbance close to unity are of crucial importance for diverse applications, ranging from thermal imaging, photocatalysis, and light trapping to sensitive trace gas detection and sensing of proteins and polymers. A key factor for the performance of such devices is the need for absorbance with high acceptance angles, which are able to utilize all incident radiation from the forward-facing half-space.

Researchers have now created a tunable, angle-, and polarization independent large-area perfect absorber, using a combination of colloidal lithography, with disordered arrangement, and dry-etching. On a multilayer system, composed of a mirror, a dielectric spacer, and a thin gold layer, polystyrene nanospheres are simply deposited by dropcoating, acting as a mask for the following dry-etching process with Argon ion beam. The design is easy and fast to produce, and low cost compared to other common methods, such as, for example, electron-beam lithography. Variation of the dry-etching time decreases or increases the diameter of the resulting nanodisks, and shifts the resonance from almost 825 to 1025 nm with reflection smaller than 3% and zero transmission. Due to the inherent disordered arrangement, the group are satisfied that their design is fully polarization independent, does not suffer from Rayleigh anomalies, and the absorbance remains higher than 95% for incident angles up to 50°.