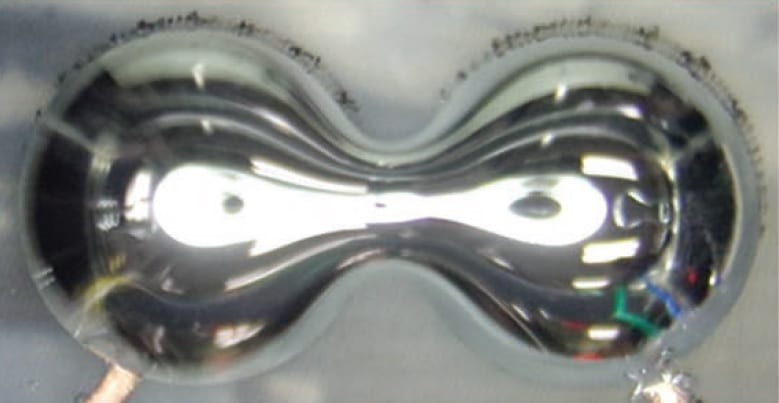 Researchers from Carnegie Mellon and NC State Universities, USA, are revealing Magneto’s secrets by exploiting electrochemistry to gain control over the interactions of liquid metal droplets. 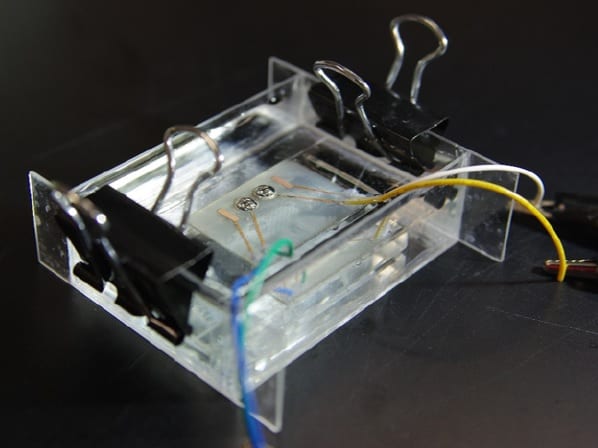 Droplets of a eutectic gallium-indium alloy (denoted EGaIn) were formed using a syringe pump to deposit them into a NaOH electrolyte bath. Droplets were used in pairs to contact the source and drain electrodes of an electric circuit.

With the whole setup immersed in electrolyte solution, an electric field was applied and a reversible separation of the liquid metal droplets was achieved, forming on/off states on command via the physical rearrangement of the circuit at a voltage of just 1–10 V. This is an achievement because previous examples of liquid circuitry have required either higher voltages or other environmental stimuli for activation.

The applied field works by creating an electrochemical oxide gradient across the coalesced EGaIn droplet pair, which causes a gradient in the interfacial tension, leading to instability and droplet separation. When the field is off, the droplets flatten under gravity and coalesce. The reversibility of this electrochemical reaction turns the droplets into an electrical switch by either connecting or breaking the circuit.

The authors of this study demonstrated simultaneous control over multiple droplet pairs, showing that it was possible to switch either all pairs together or each pair separately, leading to the formation of logic gates.

Aside from the advantages to research – allowing the study of interfacial forces, Rayleigh instabilities, and the interaction of droplets in electrochemical systems – this work opens up the possibility for soft circuitry based on field-programmable microfluidics. Conveniently, this comes without the need for any fancy equipment: the soft circuitry could be interfaced directly with standard microelectronics and a conventional DC power supply.

This is the “first soft matter electrical switch that operates with voltages similar to that of conventional solid-state transistors,” the authors claim.

The full article, including a complete electrochemical analysis of the reversible switching mechanism, is freely available for all to read in Advanced Science.