Light-induced switching of single molecule electronic junctions has been successfully demonstrated by researchers in Germany. 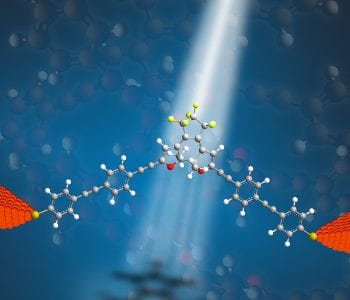 Molecular electronics requires design of nanoscale circuits, using single organic molecules as circuit elements.  Thus, controlled manipulation of the behavior of the electrically functional single molecules is a necessity. Researchers in Germany have demonstrated this functional control of electrical transport properties in a molecular switch controlled by UV light. 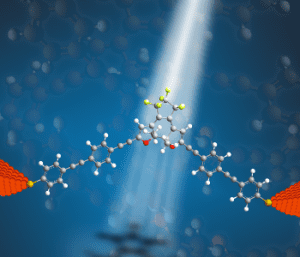 The active molecules in the switch were diarylethenes, which are known as photochromic molecules, connected to gold nanowire electrical contacts.  Switching was achieved between the high conductance “on”-state and a low conductance “off”-state.  In the on-state, the ring-shaped difurylperfluorocyclopentene core of the molecule is closed up, allowing electrical transport across the ring.  For the off-state, the opened ring structure leads to a reduced conduction.  In these experiments, the molecular junction was switched from the off-state to the on-state after 10 minutes irradiation with UV light.  For this process, the switching is not reversible, and the junction is permanently set in the on-state after irradiation.  This is the first demonstration of light-induced switching in single molecular junctions.

Switches were prepared with two different active diarylethene molecules, with different side groups.  One molecule was prepared with electron-withdrawing CF3 side groups, while the other was simply hydrogen terminated.  Comparison of the current­–voltage characteristics of each switch shows that, while the absolute current is decreased across the switch containing the CF3 side groups, the ratio of current in the on- and off-states remained the same.  Switching was also demonstrated for these molecules when in solution, and not directly contacted by the electrodes, with distinguishable conductance characteristics.

In order to utilize nanoscale molecular circuits, molecules which form reliable electrical contacts reliably and which provide electronic functionalities similar to devices known from semiconductor structures are needed. This will require complex structures that can change their behavior when triggered by external influences. These diarylethene  molecules have been shown to be suitable for applications in controllable molecular electronics, providing an active electronic building block on the molecular scale.