Researchers from Eindhoven have developed a spiropyran containing photoresponsive size-tunable hydrogel that can be used as a micromixer or light switchable valve. 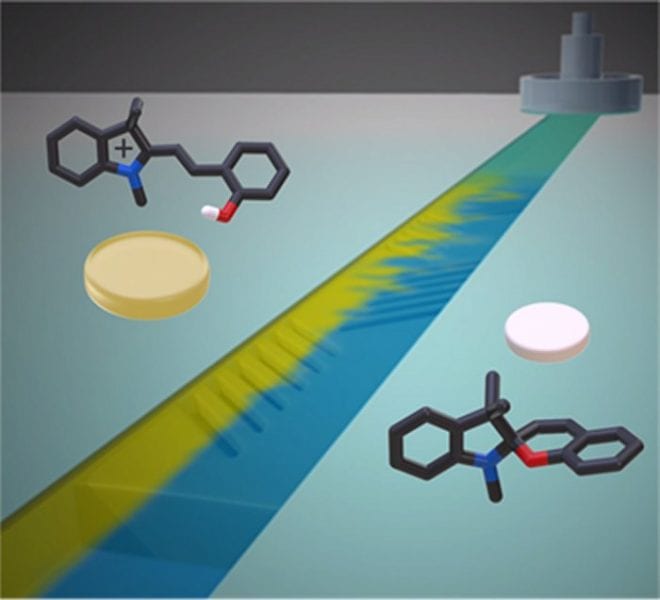 Microfluidic devices allow the manipulation of fluids down to the micrometer scale. They are receiving a lot of attention for applications where low volumes and high throughputs are required. In such devices, different fluids often not only need to be transported, but also mixed. However, due to the small size of the micro channels, laminar flow usually dominates and turbulent flow is non-existent. Within this laminar flow, mixing is predominantly caused by diffusion, which requires long residence times of the fluids, limiting the flow speed and throughput.

Passive mixers cause mixing by structural features inside the microfluidic channel that stretch and fold the liquids to induce shorter path lengths for diffusion. The downside of the passive mixers is that they cannot be manipulated to the user’s needs since the structural features are static. It would be attractive to make such mixers switchable, as this allows to control mixing and to easily clean a microchannel.

Using hydrogels inside microfluidic channels allows changing the material from a swollen to a collapsed state with light, by incorporation of a light-responsive dye in the polymer hydrogel. Albertus P. H. J. Schenning, Jaap M. J. den Toonder, and co-workers now show that the size of the photo-responsive hydrogel can be tuned by changing the intensity of the light and these gels can actually be used to fabricate a passive slanted groove mixer. This mixer can be switched off by light allowing to change the mixing of microfluidics to non-mixed flows. These findings will open new possibilities for multi-purpose microfluidic devices where mixing or a valve can be tuned by light.