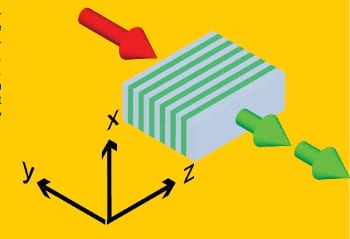 The field of nonlinear optics has been driven by the aim to provide light in any wavelength regime. In many applications, the artificial, anisotropic crystal lithium niobate (LiNbO3), which has high nonlinear coefficients, is used. In order to achieve efficient photon conversion, the phases of the photons of the incident and of the doubled frequency have to be matched. Otherwise, back conversion of the second harmonic power P2ω to the pump Pω occurs due to the phase mismatch depending on the difference of refractive indices at the fundamental and second harmonic frequency.

In a birefringent crystal, phase matching can be achieved by finding an axis of propagation for which their respective refractive indices are equal. Alternatively, back conversion can be diminished or avoided with quasi phase matching (QPM). Usually, QPM structures are fabricated by means of electric field poling. Yet, this technique is restricted to the d33 component of the nonlinearity, consequently just z-cut crystals can be poled such that the individual domains range through the entire crystal. However, there are certain applications that require the use of x-cut crystals, e. g. electro-optic modulators. At the same time they would benefit from efficient frequency conversion mediated by QPM. While poling of x-cut crystals has been demonstrated with surface electrodes, the reversed domains extended only a few micrometers below the surface.

Jens Thomas from the University of Jena (Germany) wanted to realize a QPM structure that extends far into the volume of an x-cut LiNbO3 wafer. Instead electric field poling, they decided to use ultrashort laser pulses to structure the crystal. The aim was not to switch the sign but to periodically lower the nonlinearity.

The laser-based approach has many benefits. Most importantly, it is more flexible since it does not require any micro structuring technology to lithographically define the respective poling patterns. Additionally, it can easily be combined with ultra-short pulse laser based direct writing of optical waveguides, thus enabling all-optical processing of integrated optical devices.

The researchers were able to achieve all optical inscription of quasi phase matching structures in an x-cut LiNbO3 crystal. Quasi phase matching was obtained by periodically lowering the nonlinear refractive index of the crystal using focussed ultrashort pulses. The structures were used to frequency double 1.55 μm light. The converted signal could be enhanced by a factor of 70 with respect to the unmodified material. From these measurements the scientists deduce that the nonlinearity has been periodically damped up to 20%.