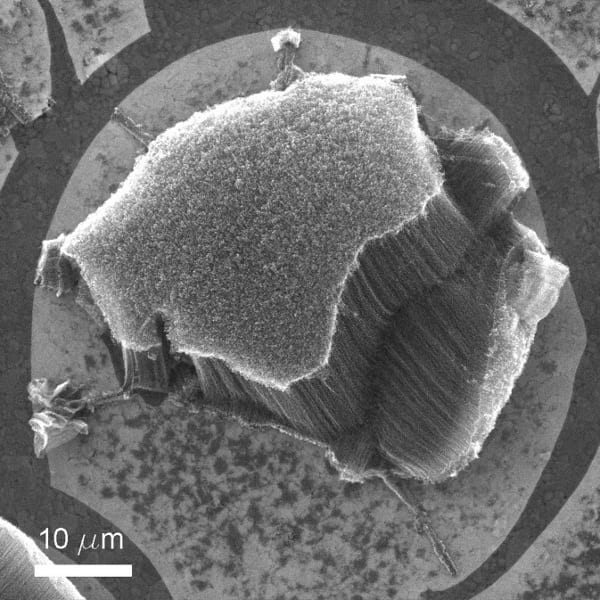 A seamless graphene/nanotube hybrid created at Rice University may be the best electrode interface material possible for many energy storage and electronics applications. 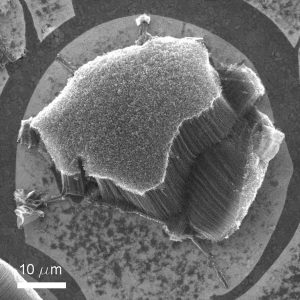 A plateau of nanotubes grown seamlessly from graphene at Rice University. The hybrid material may be the most efficient ever made for supercapacitors. (Credit: Tour Group/Rice University)

Led by Rice chemist James Tour, researchers have successfully grown forests of carbon nanotubes that rise quickly from sheets of graphene to astounding lengths of up to 120 microns, according to newly published work. A house on an average plot with the same aspect ratio would rise into space.

That translates into a massive amount of surface area, the key factor in making things like energy-storing supercapacitors.

The Rice hybrid combines two-dimensional graphene, which is a sheet of carbon one atom thick, and nanotubes into a seamless three-dimensional structure. The bonds between them are covalent, which means adjacent carbon atoms share electrons in a highly stable configuration. The nanotubes aren’t merely sitting on the graphene sheet; they become a part of it.

“Many people have tried to attach nanotubes to a metal electrode and it’s never gone very well because they get a little electronic barrier right at the interface,” Tour said. “By growing graphene on metal (in this case copper) and then growing nanotubes from the graphene, the electrical contact between the nanotubes and the metal electrode is ohmic. That means electrons see no difference, because it’s all one seamless material.

“This gives us, effectively, a very high surface area of more than 2,000 square meters per gram of material. It’s a huge number,” said Tour, Rice’s T.T. and W.F. Chao Chair in Chemistry as well as a professor of mechanical engineering and materials science and of computer science and a co-author with former postdoctoral researcher and lead author Yu Zhu, now an assistant professor at the University of Akron.

Tour said proof of the material’s hybrid nature lies in the seven-membered rings at the transition from graphene to nanotube, a structure predicted by theory for such a material and now confirmed through electron microscope images with subnanometer resolution.

Carbon has no peer as a conductive material in such a thin and robust form, especially in the form of graphene or certain types of nanotubes. Combining the two appears to offer great potential for electronic components like fast supercapacitors that, because of the massive surface area, may hold a great deal of energy in a tiny package.

Rice chemist Robert Hauge and his team made the first steps toward such a hybrid over the past decade. Hauge, a distinguished faculty fellow in chemistry at Rice and co-author of the new work, discovered a way to make densely packed carpets of nanotubes on a carbon substrate by suspending catalyst-laced flakes in a furnace. When heated, the catalyst built carbon nanotubes like skyscrapers, starting at the substrate and working their way up. In the process, they lifted the aluminum oxide buffer into the air. The whole thing looked like a kite with many strings and was dubbed an odako, like the giant Japanese kites.

In the new work, the team grew a specialized odako that retained the iron catalyst and aluminum oxide buffer but put them on top of a layer of graphene grown separately on a copper substrate. The copper stayed to serve as an excellent current collector for the three-dimensional hybrids that were grown within minutes to controllable lengths of up to 120 microns.

Electron microscope images showed the one-, two- and three-walled nanotubes firmly embedded in the graphene, and electrical testing showed no resistance to the flow of current at the junction.

“The performance we see in this study is as good as the best carbon-based supercapacitors that have ever been made,” Tour said. “We’re not really a supercapacitor lab, and still we were able to match the performance because of the quality of the electrode. It’s really remarkable, and it all harkens back to that unique interface.”