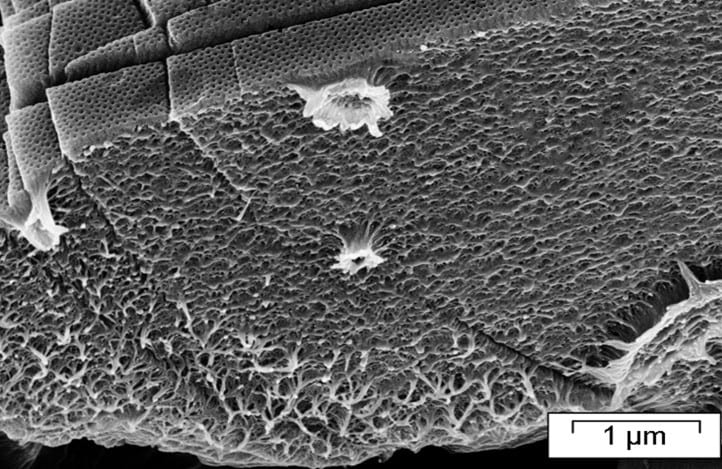 The formation of isoporous membranes is a sensitive process dependent on molecular, solution, and processing parameters. Writing in the Journal of Polymer Science: Polymer Physics, Volker Abetz and colleagues use a combination of block self-assembly and phase inversion to prepare asymmetric membranes with highly ordered hexagonally packed cylinders composed of polystyrene-block-poly(ethylene oxide).

The self-assembled nanostructured systems were a limiting factor in pharmaceutical and separation systems because of biofouling. Modifying the surface of the material with poly(ethylene oxide), they exhibit improved protein resistance, water solubility and blood compatibility. The advantages of the properties and self-assembly of polystyrene-block-poly(ethylene oxide) with the nonsolvent induced phase inversion for controlled orientation were combined to obtain the first integral-asymmetric membrane with an isoporous top layer.

“Our results provide a detailed insight in the structure formation of integral-asymmetric, isoporous membranes of polystyrene-block-poly(ethylene oxide). These were carried out via dynamic light scattering and cloud point determinations. Based on our results we successfully set parameters like non-solvent, solvent composition and evaporation time,” says Abetz. “Poly(ethylene oxide) is widely known to prevent membrane biofouling. Furthermore it is proven to be biocompatible. For this reason these membranes offer a high potential for medical and biotechnological applications.”

“Since this process is sensitive to a huge number of parameters, the challenge of our work was to investigate some of these parameters like evaporation time, polymer concentration and the solvent and non-solvent system. Therefore, we offer insight into the thermodynamic properties of the ternary system of the block copolymer, solvent and non-solvent system,” explains Abetz.

Further research will focus on the study the structure formation of block copolymers of this type with various molecular weights and volume fractions. Furthermore the researchers plan to optimize the flux properties and to determine the fouling properties of these membranes over long periods of time.