It is shown that polymer such as Teflon can be distributed around each grain of ZnO, and this, in turn, allows for use to form a composite material with an electrical conduction that is blocked at low fields and conducts at high field through the quantum mechanical process known as “tunneling”. 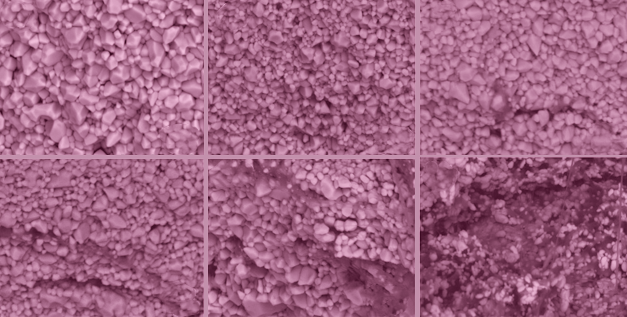 A polycrystalline ceramic is a material that is processed through a thermal process known as sintering, and ideally is dense.  It is somewhat, in regard to the microstructure, similar to a sugar cube. That is, it is made up of many random crystalline grains compacted together, which endows increased mechanical strength as it becomes more densified.

In ceramic materials, such as zinc oxide (ZnO), this process requires high temperatures (≈ 1000°C), and therefore the ability to combine polymers into the grain boundaries seemed impossible for a long time.  With the discovery of the cold sintering processes, it is now possible to have a polymer material co-sinter with a ceramic material, like ZnO.

In their paper in Advanced Engineering Materials by Jing Guo, Clive Randall, and co-workers, it is shown that polymer such as Teflon (PTFE) can be distributed around each grain of ZnO. This, in turn, allows for the formation of a composite material with electrical conduction that is blocked at low fields, and conducts at high field through the quantum mechanical process known as “tunneling”.

Devices can be in multilayer and disc form, or large arrestor blocks for a variety of applications, ranging from circuit protection in telecommunication and handheld electronics, power electronic circuits, through to power lines on the grid. Such devices are known as varistors, a name based on “variable resistors”, which are essentially reusable “fuses”.

This is the first time that such devices have been made with a composite of semiconducting ceramic grains (ZnO) and a polymer nanometer region in each of the grain boundaries.