Improving radio reception by converting the waves to light 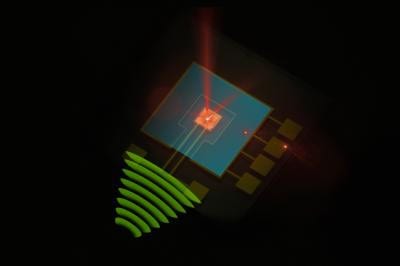 In this artist’s impression of the device, radio waves (green) arrive and are sent to the membrane (center) via gold wires. This induces charge oscillations on the 4-segment electrode right underneath (~1 µm distance) the membrane. Electric forces thus make the membrane move. This motion is detected with a laser beam (red), with an extreme accuracy (1 femtometer per second measurement time), translating to a very high sensitivity to radio waves. Image: Niels Bohr Institute.

Ever worry about losing your mobile-phone reception? The problem is a weak microwave signal. The same problem hampers cosmologists looking at the early universe, a glimpse embodied in the cosmic microwave background. Or take a pressing earthly example: oncologists often locate and identify tumors using MRI scans. All three of these efforts—communications, cosmology, medicine—depend on discriminating weak microwave or radio signals from a noisy environment. A new approach to this important problem provides a clean, all-optical detection of microwaves and radiowaves featuring noise mitigation a thousand times better than existing methods.

The new detector was just developed by a collaboration of scientists from the Niels Bohr Institute at the University of Copenhagen, the Technical University of Denmark, and the Joint Quantum Institute. The building and testing of this first all-optical detection of radio waves is reported in the 6 March 2014 issue of the journal Nature.

The detector works like this: radio waves strike an antenna which constitutes one element in an electronic circuit. Another element in that circuit is a capacitor, one of whose electrodes consists of a flexible membrane. Light at visible frequencies reflects off the back side of this membrane. Depending on the radio signal arriving just then at the antenna, the silicon-nitride membrane (coated with a 50-nm-thick film of silver) mechanically alters its shape accordingly. This in turn modulates the visible light waves in a consistent way. Thus a radio signal, typically in the megahertz range (106 Hz), can be converted into an optical signal, typically in the hundreds of terahertz range (1014 Hz).

This up-conversion from radio to optical has several advantages. First, it allows a radio signal to be transduced into light and shot down an optical fiber rather than being sent down a copper wire, where it would suffer considerable energy loss. The radio-optical conversion will also help facilitate the development of devices that handle quantum information. In a regular microphone, sound is converted into electrical signals sent down a wire. In the analogous quantum microphone, quantum information could be interconverted between radio and optical waves alternatively for transport or processing.

Second, and no less important, is the mitigation of noise. Radio waves were a boon for communications, starting with Marconi and the first “wireless” transmission of information in the early 20th century. As radio electronics grew in sophistication scientists and engineers became more and more concerned with Johnson noise, the ubiquitous radio noise present by virtue of the simple fact that Earth’s surface is a warm place; our world positively glows in radio waves. Named for Bell Labs researcher John B. Johnson, this thermal noise competes with whatever radio signals are being processed in devices. One can amplify a weak signal, but the noise gets amplified along with the signal.

Even more unwanted noise is added in the amplifiers that bring the signal to a level at which it can be processed. For years special transistors have accomplished this task. One major drawback of this approach has been the need to chill the converters to cryogenic temperatures to reach their best performance. One example of this kind of device is the one used on the orbiting Planck Telescope, which maps the microwave background. When the craft’s coolant is depleted, the mission ends.

The new device not only produces a much higher degree of noise reduction but it does this at room temperature, thus obviating the need for cryogenics. The development is based upon prior theoretical work by the same collaboration. “This device is the first room-temperature transducer of radio waves to optical waves at the quantum level and the first to entail a threefold electrical-mechanical-optical conversion. Previous efforts have bridged the electrical and mechanical or the mechanical and optical, but not all three realms,” said the lone JQI participant, theorist Jacob Taylor.

Taylor says that the whole up-conversion process can be done in reverse. Again for the purpose of quantum communication, there might be occasion to convert microwave or radio signals into optical form and then back into radio after transmission from one quantum device to another.

A team leader on the new detector effort is Albert Schliesser of the Niels Bohr Institute in Copenhagen. He describes the detector this way: “In the first place, this is a completely new way to measure electrical signals: making them excite a tiny membrane which we monitor with laser light. It may sound surprising, but this approach is so sensitive that it can out-perform conventional electronic amplifiers. That means, for example, that it could be a new way of getting clearer MRI images, or maps of the sky recorded by radio telescopes. We are currently trying to extend our work—which so far is really just a demonstrator of the concept—to attain a smaller detector which is more sensitive and capable of handling a wider band of radio signals.”