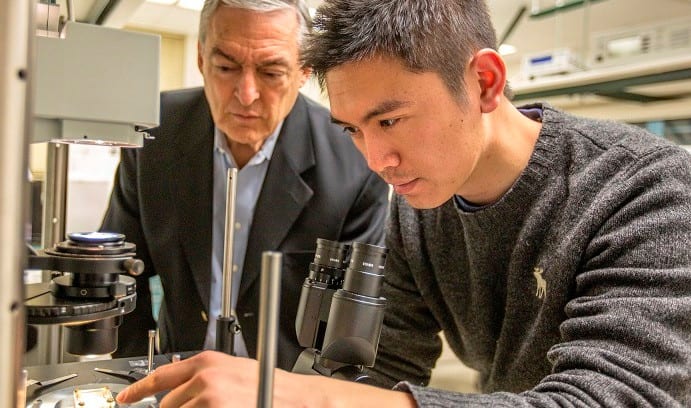 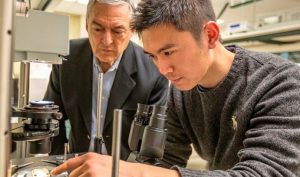 Yongkang Gao (right) and Filbert J. Bartoli took advantage of nanofabrication advances to improve the resolution of their nanoscale biosensors to levels almost as sensitive as those achieved by much larger commercial systems. Christa Neu

Over the past half-century, biosensors have opened a new window on the physical world while revolutionizing much of modern society.

By utilizing an electronic or optical system, biosensors detect and interact with the components of biological materials, making it possible to analyze DNA, measure the content of glucose in the blood, detect biotoxins in the water and the atmosphere and much more.

Yongkang Gao has spent much of the past three years using nanotechnology to improve the speed, efficiency and sensitivity of biosensors while dramatically decreasing their size and cost of operation.

His goal is to transform today’s relatively bulky surface plasmon resonance (SPR) biosensors, which take up most of a desktop, into nanoplasmonic biosensors that can be held in the hand and can perform hundreds of tests—medical, environmental or other—at a time.

Gao, who completed his Ph.D. in electrical engineering in January and is now a researcher with Bell labs in New Jersey, is the lead author on an article that a team of Lehigh engineering researchers published recently in the journal Lab on a Chip.

Titled “Plasmonic interferometric sensor arrays for high-performance label-free biomolecular detection,” the article was coauthored with Zheming Xin, Beibei Zeng, Qiaoqiang Gan, Xuanhong Cheng and Filbert J. Bartoli. Xin and Zeng are Ph.D. candidates. Gan, who earned his Ph.D. from Lehigh in 2010, is an assistant professor of electrical engineering at the State University of New York at Buffalo. Bartoli, the Chandler Weaver Endowed Chair of Electrical and Computer Engineering, is Gao’s Ph.D. adviser and leads the project. Cheng, the P.C. Rossin Assistant Professor in the department of materials science and engineering, is director of Lehigh’s Lab of Micro- and Nanotechnology for Diagnostics and Biology.

Improving on the “gold standard”

Scientists have made great progress in recent decades with labeled biosensors that use a receptor attached to a fluorescent molecule to target biomolecules. When bonding occurs between the target and receptor molecules, the fluorescent label emits a light signal whose color provides information about the identities of the two molecules that are bonding and the strength of the bond.

More recently, scientists have developed a label-free sensing approach, which measures a simple change in the optical or electrical signal to determine which molecules have bonded and how strong their bonds are. Without the use of time-consuming and costly labeling processes, researchers have demonstrated label-free biosensing that is simple and fast, and that eliminates any unwanted interference between labels and biomolecules.

SPR technology, which has been used commercially for more than 20 years, represents the current “gold standard” for label-free biosensing, says Gao. SPR biosensors can monitor biomolecular bonding in real time while providing information on bonding kinetics, affinity, specificity and concentration, all without the use of labeling. The sensors are widely used in drug testing, diagnostics, proteomics (the study of proteins in living organisms) and immunology.

But the prism-coupling design used in most SPR biosensor systems, says Bartoli, requires instrumentation that is cumbersome, complex and expensive, limiting their use mainly to laboratory research applications.

To overcome these limitations, researchers are turning to nanotechnology. Advances in fabrication techniques, says Gao, have made it possible to build, on a chip, nanostructures that have dimensions similar to those of visible light waves, or about 400 to 700 nanometers (1 nm is a billionth of a meter). But while these nanoscale devices are smaller, simpler and cheaper than conventional SPR biosensors, so far they are one to two orders of magnitude less sensitive.

By combining two new approaches—nanoplasmonic architectures and interferometry—the Lehigh group has succeeded in retaining the simplicity of nanoscale biosensors while improving sensor resolution to levels almost as sensitive as those achieved by commercial SPR systems.

Plasmonic architectures are based on surface plasmon polaritons (SPPs), a type of electromagnetic wave that is generated when a beam of light couples with an oscillating wave of electrons in the surface of a metal. Interferometry is an experimental technique that uses the interference of light waves to yield information about refractive index changes, surface irregularities and other phenomena involving the interaction of light and matter.

“The resonant interaction of light waves with oscillating electrons,” says Gao, “causes the waves to be highly confined to a metal surface. This creates a strong optical field within a nanoscale volume, which is especially suitable for biomolecular detection. SPPs were discovered half a century ago but it is only recently, with the maturing of nanofabrication techniques, that engineers have been able to exploit the plasmonic nanostructures to freely control the interactions between light waves and electrons.”

In an effort to improve the sensitivity of its nanoplasmonic sensing device, the Lehigh group has focused on several goals—achieving a much narrower sensing peak line width, a higher spectral contrast and a larger peak shift for a moderate refractive index change.

After performing 3-D numerical simulations to test and optimize various parameters, the Lehigh group etched a 600-nm-diameter nanohole and three surrounding concentric grooves into a 300-nm-thick gold film deposited onto a glass substrate. This geometry, says Gao, achieved the proposed research goals and obtained greater sensitivity and imaging than the nanohole array sensors developed by other researchers.

“Other researchers investigating nanoplasmonic sensors have been limited by a very broad line width,” he says. “We want a much narrower line width, as well as a high spectral contrast and an intense transmission peak.”

When the Lehigh researchers illuminated their device with a collimated white light beam, the light coupled with electrons in the concentric grooves to form SPPs, which propagated toward the nanohole in the center. There, the SPPs interfere with the light beam being transmitted through the hole.

“By careful structural tuning,” the researchers wrote in Lab on a Chip, “we can effectively control the phase and intensity properties of interfering SPPs and light waves to generate spectral fringes with high contrast, narrow line width and large amplitude, all key characteristics to achieve optimized spectral sensing.”

Moreover, the Lehigh device has the potential to achieve simultaneous measurement from a high-density array of 144 sensors and, when combined with CCD imaging, is predicted to have significantly higher throughput as well.

“This is a very simple optical transmission geometry,” says Bartoli, “and it transforms the SPR from an expensive, bulky system to a low-cost monitoring platform without sacrificing performance.