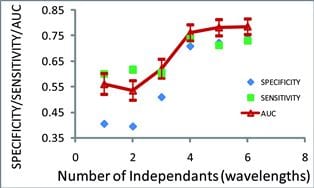 Gastrointestinal malignancies continue to be the second leading cause of cancer-related deaths in the United States (24%), of which about 10% is due to esophagus cancer. People from the Western hemisphere tend to develop esophageal cancer from prior metaplastic mucosal transformation referred to as Barrett’s esophagus (BE). Early detection and treatment of dysplasia in the esophagus significantly impacts survival. Unfortunately, the poor detection sensitivity of white light endoscopy is a significant limitation. Biopsies are inevitable although error-prone.

It was hypothesized that the microvasculature, and hence blood content, of the tissue will be altered in a stage-dependent manner, in dysplastic lesions relative to that in BE – a difference that should be detectable by diffuse reflectance spectroscopy. A team from Ontario Cancer Institute and St Michael’s Hospital, Toronto (Canada) therefore suggested the use of diffuse reflectance spectroscopy as an adjuvant to autofluorescence endoscopy. Since there is no a good animal model of dysplasia in BE, the researcher tested this hypothesis directly in BE patients undergoing routine endoscopic surveillance.

In their study, they collected 2579 spectra in 54 patients, measured with careful attention to sources of potential artifacts. By systematic analysis of the diffuse reflectance spectra, they found a specific algorithm, using the four wavelengths 485, 513, 598, 629 nm, that provides statistically-significant discrimination between BE and dysplasia, with or without the presence of an inflammatory component. The discrimination occurs likely due to redistribution of blood content in the tissue sensed by the optical probing with the wavelength-dependent sampling depth.

In terms of clinical translation, this technique could be implemented in wide-field imaging mode. It would be compatible with autofluorescence detection. The realtime images could improve the accuracy of existing endoscopy techniques for finding early pre-malignant lesions in Barrett’s esophagus.