A recent review highlights and discusses the layer-by-layer encapsulation of solid drug particles. 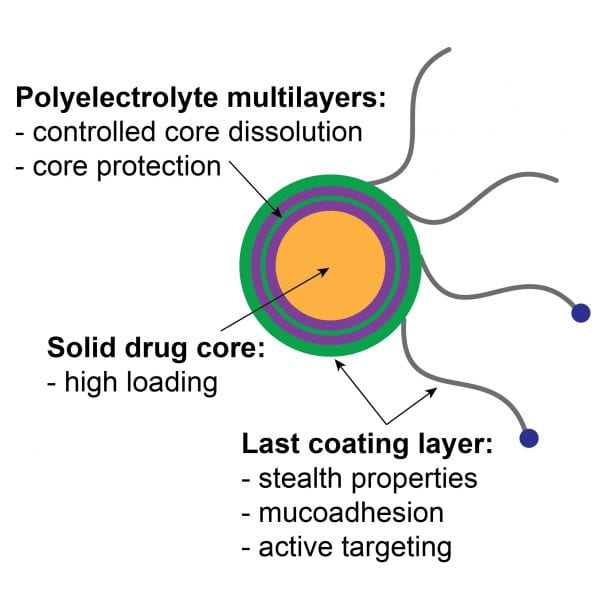 Layer-by-layer coating is a simple and versatile technique based on the sequential deposition of molecular species on planar surfaces or colloidal templates. The concept has found a broad application in many biomedical (e.g. drug delivery, drug eluting stents, or surgical sutures) and non-biomedical fields (e.g. batteries, electrodes, or solar cells).

The special relevance of layer-by-layer coating in drug delivery primarily emerges from its ability to control the release rate of the cargo encapsulated within the colloidal core. This can be achieved by tuning the permeability of the coating by e.g. altering the number of layers or introducing stimuli-sensitive components. The variability of the coating materials that ultimately tailor the final properties of the systems accounts for the versatility of this approach.

Multilayers composed of synthetic polyelectrolytes and charged polysaccharides assembled via electrostatic interactions represent a major group of materials used for coating. However, colloidal cores can be also covered with other species, such as nanoparticles, proteins, nucleic acids, or other drugs, which confer unique properties to the system. In addition, the modification of the last coating layer allows the governing of the interactions of the colloidal particle with the tissue/cells of interest (e.g. introduce stealth properties, active targeting, or mucoadhesiveness).

Layer-by-layer encapsulation of micro and nanoparticles composed purely of a hydrophobic drug is a particularly attractive topic. Due to their intrinsic properties, such as increased surface area and enhanced dissolution rate (compared to coarse drug powder), drug micro and nanoparticles offer great benefits for overcoming problems related to low aqueous solubility of some active compounds, such as poor bioavailability and absorption after oral administration.

Moreover, drug nanoparticles injected intravenously can deliver large quantities of drug without the use of potentially harmful solubilizing excipients. Thus, the combination of layer-by-layer encapsulation with solid drug particles could generate a highly tunable and effective delivery system.

A recent review by A. Polomska, J.-C. Leroux and D. Brambilla highlights and discusses the advances in the field, including the core fabrication step, coating materials and techniques, shell permeability control and in vitro and in vivo outcomes.