The Importance of Plasma Reduction to Nanocomposites

New research shows in situ processes as a solution to improve dispersion in nanocomposites.

Nanocomposites composed of metal nanoparticles and polymers combine the best of two worlds: the optical, electronic, magnetic, and catalytic properties of metals and the mechanical and chemical properties of polymers. Unfortunately, like oil and water, mixing of the two dissimilar materials often leads to phase separation and particle agglomeration, a major impediment to envisioned applications. A potential solution to improve this dispersion are in situ plasma reduction processes that form particles within a precursor-containing polymer film.

New Research on In situ Processes to Improve Dispersion in Nanocomposites 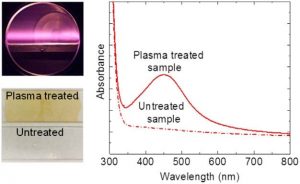 Improving the dispersion of metal nanoparticles within a polymer matrix using an in situ plasma reduction process.

An important step forward is made in new research by Dr. Souvik Gosh et. al. of the Department of Chemical and Biomolecular Engineering in Cleveland, USA to understand and thus improve the dispersion of metal nanoparticles within a polymer matrix using an in situ plasma reduction process. In comparison to other in situ approaches, the plasma process is low temperature and, thus, compatible with temperature-sensitive polymers.

However, the rich flux of electrons, ions, energetic and reactive neutrals, as well as ultraviolet (UV) light that enables reduction, also makes understanding the mechanism for particle formation difficult. Using a carefully crafted study, a correlation wass established between the charge fluence to the film surface and the particle formation rate which indicates electrons and ions are the predominant drivers of plasma reduction.

This research presents a systematic study using a low-pressure, pulsed electron beam generated argon plasma to treat silver cation-containing polyacrylic acid films. The background pressure, treatment time, period, and pulse width are varied to influence charged species generation and a direct correlation between nanoparticle density is demonstrated, as assessed by ultraviolet-visible absorbance analysis, and the charge fluence. Although the experiments could not separate the specific role of ions and electrons, the research demonstrates the importance of charged species to nanoparticle formation.