An X-ray ptychography study follows the destruction of a microscale composite during compression in unprecedented detail. 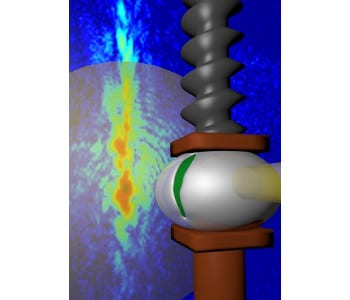 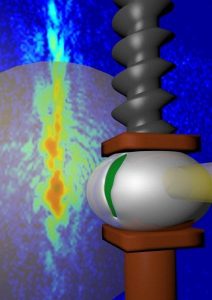 Miniature material composites with micro- and nanoscale structures are key building blocks of synthetic and biological microsystems. Knowing their mechanical response to external stimuli is of pivotal importance for tailoring the composites into use as functional devices. For example, the minimum radius of curvature that can be imposed on a nanoscale cantilever before it breaks is a crucial parameter for the future use of such cantilevers as sensors or actuators. Micromechanical measurements based on nanoindentation, optical tweezers and similar techniques suffer from the fact that the exact failure mechanism of the system under study can be difficult to deduce from the measured stress-strain data.

Coherent diffractive X-ray imaging (CDI) encompasses a family of techniques which holds promise of revolutionizing X-ray microscopy by opening for resolution better than 10 nm. Traditionally, X-ray imaging has been limited in resolution by the technical difficulties associated with producing high quality objective lenses. In CDI, the use of objective lenses is evaded, and the computer-based image formation is made using iterative procedures for numerically retrieving the phase of the scattered wave field from diffraction patterns. Ptychography is a particularly promising CDI technique, which has the additional benefit of an, in principle, unlimited field of view.

Breiby and coworkers report an X-ray ptychography study that in unprecedented details follows the destruction of a microscale composite during compression. Specifically, a spherical polymer bead of 10 micrometer diameter, coated with a thin metallic layer, was subjected to a flat punch compression test. Such beads already have many applications in electronics, physics and medicine. The industrially important onset of delamination and fracture, which is difficult to assess by other means, was directly observed. Moreover, from the quantitative electron density provided by ptychography, the local densification of the polymer core during compression could be measured to about 200 nm resolution in 3D. The experimental results are reported to compare well with finite element models, demonstrating that the ptychographic imaging is capable of retrieving internal strain information from non-crystalline materials.

In addition to continued studies of strain and structure of microsystems and functional materials under operating conditions, as initiated in this work, the authors foresee that the field of nanobiomechanics will benefit from ptychography in the future. Questions that can be addressed include how the interior of bacteria and other small biological samples, also in liquid environments, respond to external stimuli like mechanical confinement. Because measuring the mechanical response of nano- and microscale composites and devices is a prerequisite for the continued development of nanotechnology, the progress of in situ ptychography is of high scientific interest.