Nanotubes made from sheets of zeolite promise to expand this material's already extensive range of application. 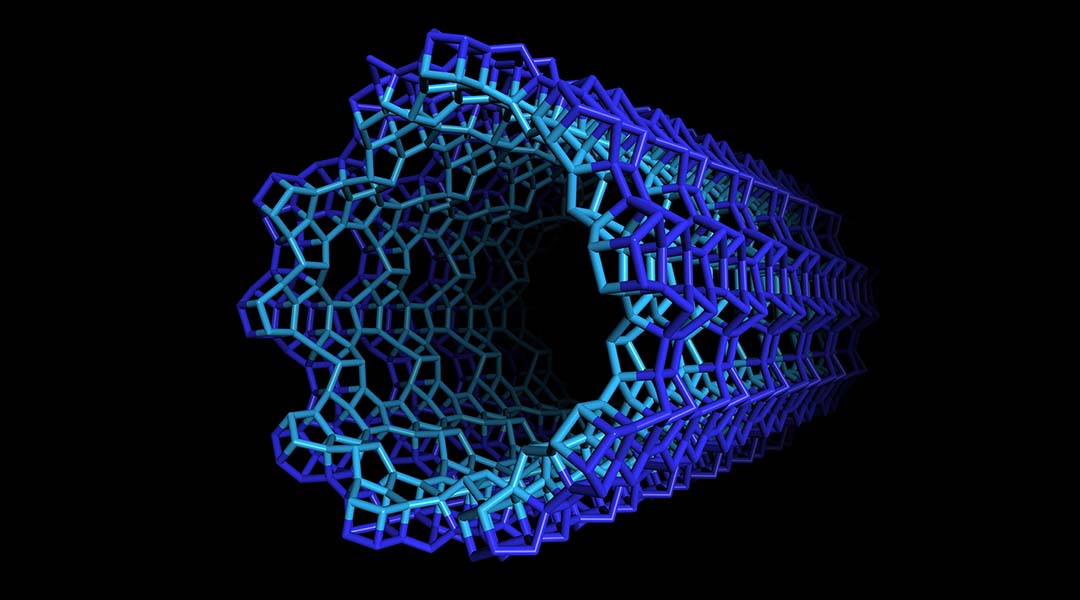 Materials filled with holes are full of opportunity for innovation and invention, and in this realm, zeolites reign as king. These hole-y materials are a class of 3D microporous crystals primarily made of aluminosilicates (or structures made of aluminium, oxygen, and silicon) — note that in the field of porous materials, pore sizes are defined in terms of three length scales: microporous < 2 nm, mesoporous 2-50 nm, macroporous >50 nm. 40 of these zeolites occur naturally, with hundreds more having been synthesized for a variety of applications.

To form these mini but mighty feats of materials engineering, organic templates primarily composed of carbon are often employed to guide the crystallization of specific zeolite motifs in water under high pressures and heat.

A recent publication in the journal Science managed to synthesize self-assembled, high surface-area nanotubes exhibiting different structural makeups on the internal and external faces. But to properly appreciate the ingenuity behind this monumental task, let’s take a brief look at the history of zeolite materials.

Generally, zeolites are crystal structures perforated with 1-2 nm diameter cavities and channels. These voids can be decorated with positively charged cations in addition to hydrogen-donating (basic) and hydrogen-receiving (acidic) sites littered throughout the structure. This has enabled many large-scale applications, such as water softening, size and shape selective catalysis, direct air capture, gas storage, and material separation.

A classic example is a zeolite formed using a nitrogen bound by four carbon chains composed of three carbon atoms each. This set-up was used to direct the formation of ZSM-5, a catalyst patented by the Mobil Oil Company. This geometry is typical of a specific family of zeolites called MFI, which have an open-frame structure assembled from five-membered aluminosilicate rings. The acidic form, HZSM-5, has additional reactive and detachable hydrogens and is celebrated for its success in enabling the conversion of methanol-to-gasoline, and more recently, methanol-to-dimethyl ether, which has potential as sustainable diesel fuel provided the methanol is sourced from CO2 and green H2.

The fascinating new nanotubes can be described as a zeolitic sheet curved to form a seamless cylinder, the inner and outer surfaces of which are a hybrid of two zeolite structures, beta and MFI.

Building on previous syntheses of zeolite structures, long carbon chains tipped with positively charged nitrogen-centered end groups were used to as a structure directing agents (templates) upon which the desired tubular structures were grown. The cationic end groups drove the formation of a microporous zeolite wall while the binding interactions between aromatic groups at the chain centers forced the zeolite to grow linearly, eventually forming a tube.

The surface area of the novel nanotubes was found to be 980 m2/g as a result of this engineered porosity, much greater than the 520 m2/g of nanosheets of the same material. As well, the nanotubes can also self-assemble into desirable repeating bundles characteristic of a type of aluminosilicate, which historically had unshapely and densely-packed channel walls unsuitable for many of the material’s desired applications.

Envisioned utility abounds for these holey tubular zeolites in the fields of nanoscale fluidics, photonics, electronic and ionic devices, polymer composites, as well as the storage and controlled release of chemicals. In addition, novel gas separation, rapid adsorption-desorption cycles, and catalytic reactions are now possible because of the unique transport properties of molecules within these mesoporous tubes alongside radial transport through the microporous walls.

In the realm of materials engineering, sometimes having less (matter) is more! Zeolites have opened windows of opportunity and shaped the world of large-scale industrial processes and products. With the discovery of zeolite nanotubes, bright vistas are shining at the end of the holey tunnel.

Stretchable, Morphing Smart Skins Inspired by Cephalopods
A pair of micro-pliers grown on hair-sized optical fibers
Bending the world's strongest material ... on the nanoscale
Gentle laser processing of perovskites at the nanoscale