A new facile method has been developed where in situ generated CO2 gas bubbles are encapsulated in a nanoparticle stabilized emulsion. 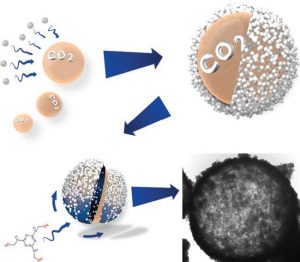 Lithium sulfur batteries are considered one of the most promising next generation of battery technology out there, with promises of a five times increase in energy density. However, the benefits of lithium sulfur batteries are plagued with a plethora of technical challenges. The dissolution of active sulfur material into the electrolyte during discharge leads to undesired side reaction and redistribution of sulfur. Furthermore, the higher concentration of sulfur in the electrolyte results in an increased viscosity, hindering the mass transfer rates of the battery. Ultimately, these challenges reduces the durability and rate performance of the battery, rendering it useless for any practical application.

Hollow morphologies have proven themselves to be indispensable throughout many different applications such as drug deliver, waste water treatment and in combating the challenges of lithium sulfur batteries. The benefits of hollow structures stem from its physical separation of the core electrolyte from the bulk electrolyte creating interesting and beneficial mass transfer dynamics. The void core can act as a sulfur mass sink, partially redirecting the mass transfer of sulfur inwards.  Professor Zhongwei Chen and co-workers have developed a new facile method where in situ generated CO2 gas bubbles are encapsulated in a nanoparticle stabilized emulsion and act as a substrate for the polymerization of carbon precursor. Nanoparticles on the surface of CO2 serve the dual purpose of stabilizing the core template (CO2) and mesoporous templating for the shell. The obtained micron sized hollow porous nitrogen-rich carbon offers stable cycle life for lithium sulfur battery applications in addition to exhibiting impressive rate performances.