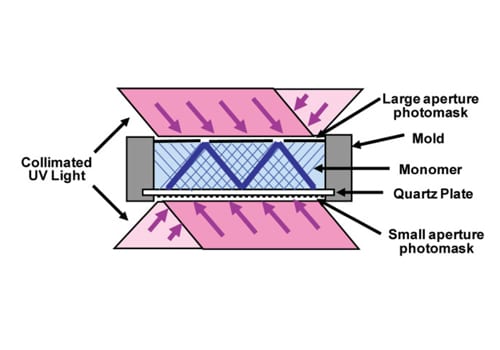 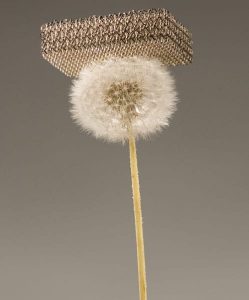 HRL Laboratories in Malibu, California/ USA is a corporate research-and-development laboratory owned by The Boeing Company and General Motors specializing in research into sensors and materials, information and systems sciences, applied electromagnetics, and microelectronics. In November 2011 HLR attracted worldwide attention by announcing that they had developed the world’s lightest material with a density of 0.9 mg/cc. Using an innovative fabrication process, researchers created a microlattice structure of interconnected hollow tubes with a wall thickness of 100 nanometers. 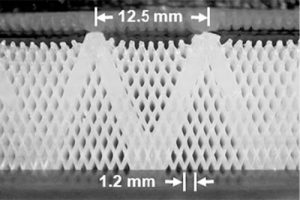 Compression experiments suggest that the introduction of hierarchy increase the specific plateau stress. The specific peak strength of the unconstrained hierarchical microlattice is roughly equal to that of the large-scale constituent lattice with a fixed node constraint and is approximately 50% higher than the constrained small-scale microlattice. The energy absorbed during compression of the hierarchical structures was equal to or greater than the sum of the energy absorbed by the small and large-scale lattice structures with the same constraint. The researchers conclude this is a result of the additional constraint between the small and large unit cell lattice structures that comprise the hierarchical structure.

In addition to the hierarchical microlattice or the microlattice structure of interconnected hollow tubes, many other lattice-like topologies are possible. Possible variations in cellular architecture, including the relative size scales of the constituent lattices, relative densities, strut angles, and lattice symmetry, offer the opportunity to enlarge the design space for tailored lattice-structured materials.