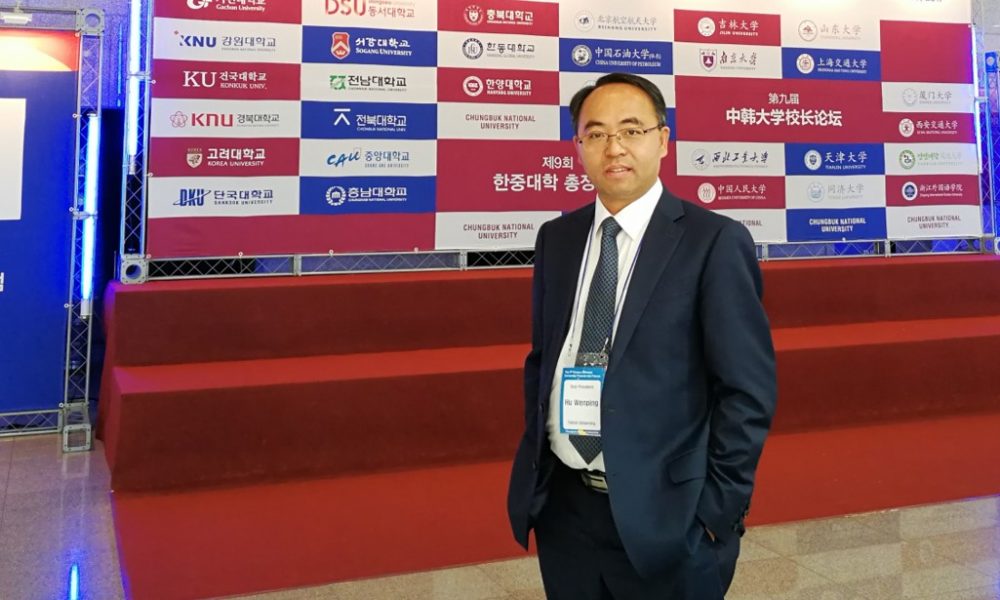 Wenping Hu is a Professor of the School of Science, Tianjin University, and a Cheung Kong Professor of the Ministry of Education, China. In 2016, after joining the Institute of Chemistry, Chinese Academy of Sciences as a full professor, he shifted to Tianjin University and is now a vice president of the university in charge of foreign affairs and science development.

During Wenping Hu’s childhood, students were encouraged by their teachers to learn from scholars: although scientists at that time were poor, they enjoyed great recognition from society. Poverty and a lack of toys also made him and his friends creative: “My little friends always played with spinning tops made from wood, how to balance the fabrication process to get the best spinning tops made me interested in science in the first place.” Therefore, his experiences during his school time contributed to Wenping Hu’s interest in science.

Wenping Hu credits his mother as being the biggest influence of his thinking and of his scientific career. As a small child, she taught him that “knowledge changes destiny” and to “jump to a higher level and think about things”. Holding those sentiments close to his heart, he pursued his passion for science. Wenping Hu notes that, without his mother, his education would never have been possible, as she worked hard and saved every cent she could to fund his studies. Unfortunately, Wenping Hu’s mother did not get to see the accomplishments of her son, as she passed away before he graduated from university in 1993. Wenping Hu’s love for her memory is his inspiration to continue towards his destiny through obtaining new insights and knowledge.

Wenping Hu’s work mainly focuses on the research of organic polymer optoelectronic functional materials. He has carried out systematic research on the design and synthesis of new organic polymer optoelectronic functional materials, the relationship between condensed structure and properties, and the application of optoelectronic devices. In his opinion, the “organic field-effect transistor as the basic element of organic electronics will push today’s electronic devices into the flexible and printable era. The breakthrough of this field is the discovery of organic materials with mobilities comparable to polycrystalline silicon or even single crystal silicon”.

Being asked what he rates as the most important scientific discovery, he says that Chinese paper making was the greatest invention of all time as “civilization can be recorded and knowledge can be inherited”. The most important development of the last five years he considers to be “the development of informatics from 2G to 5G, which deeply changed our daily life and communication ways”.

For the near future, Wenping Hu thinks that the need for miniaturization for high density applications will lead to single molecule/atom devices playing an even more important role.

To gain an overview of the exciting advancements in organic semiconductor single crystals for electronics and photonics, read the comprehensive review by Wenping Hu and his co-workers in the Advanced Materials Hall of Fame virtual issue.