New material consists of many identical piece of grossly warped graphene, each containing exactly 80 carbon atoms joined together in a network of 26 rings. 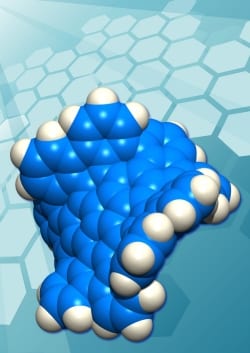 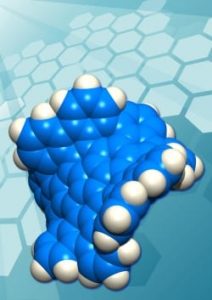 Chemists at Boston College and Nagoya University have together synthesized the first example of a new form of carbon, the team reports in the most recent edition of the journal Nature Chemistry. This new material consists of many identical piece of grossly warped graphene, each containing exactly 80 carbon atoms joined together in a network of 26 rings, with 30 hydrogen atoms decorating the rim. These individual molecules, because they measure somewhat more than a nanometer across, are referred to generically as “nanocarbons,” or more specifically in this case as “grossly warped nanographenes.”

Until recently, scientist had identified only two forms of pure carbon, namely: diamonds and graphite. Then in 1985, chemists were stunned by the discovery that carbon atoms could also join together to form hollow balls, known as fullerenes. Since then, scientists have also learned how to make long, ultra-thin, hollow tubes of carbon atoms, known as carbon nanotubes, and large flat single sheets of carbon atoms, known as graphene. The discovery of fullerenes was awarded the Nobel Prize in Chemistry in 1996, and the preparation of graphene was awarded the Nobel Prize in Physics in 2010.

Graphene sheets prefer planar, 2-dimensional geometries as a consequence of the hexagonal, chicken wire-like, arrangements of trigonal carbon atoms comprising their two-dimensional networks. The new form of carbon just reported in Nature Chemistry, however, is wildly distorted from planarity as a conse­quence of the presence of five 7-membered rings and one 5-membered ring embedded in the hexagonal lattice of carbon atoms.

Odd-membered-ring defects such as these not only distort the sheets of atoms away from planarity, they also alter the physical, optical, and electronic properties of the material, according to one of the principal authors, Lawrence T. Scott, the Jim and Louise Vanderslice and Family Professor of Chemistry at Boston College.

Graphene has been highly touted as a revolutionary material for nanoscale electronics. By introducing multiple odd-membered ring defects into the graphene lattice, Scott and his collaborators have experimentally demonstrated that the electronic properties of graphene can be modified in a predictable manner through precisely controlled chemical synthesis.

The leader of the team in Japan, Professor Kenichiro Itami, is Director of the Institute of Transformative Bio-Molecules at the University of Nagoya. The other authors of this paper include Dr. Yasutomo Segawa, an assistant professor at the University of Nagoya, Dr. Qianyan Zhang, a post-doctoral researcher at Boston College, and Katsuaki Kawasumi, a Ph.D. student from Nagoya who worked for three months during the course of this project as a visiting student at Boston College with a fellowship from the Japan Society for the Promotion of Science.