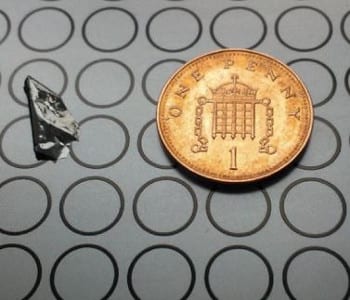 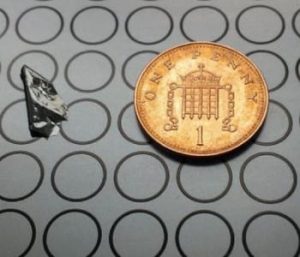 A single macroscopic flake of TGCN.

Scientists at the University of Liverpool have created a new material, related to graphene, which has the potential to improve transistors used in electronic devices.

The new material, triazine-based graphitic carbon nitride, or TGCN, was predicted theoretically in 1996, but this is the first time that it has been made.

Graphene is one atom thick, strong and conducts heat and electricity highly efficiently. The new TGCN material is also two-dimensional, but it has an electronic band gap, making it potentially suitable for use in transistors.

At present, transistors are made of expensive silicon that generates heat when used in electronic devices. Scientists have been looking for a material that is carbon-based and that has the electronic band gap needed for use as a semiconductor.

Chemist, Professor Andrew Cooper, from the University’s Department of Chemistry, said: “This is an exciting result because there are relatively few ordered two-dimensional organic solids. Finding a new member of the ‘graphene family’ is very significant.”

Starting with the inexpensive molecule dicyandiamide, the team prepared crystals of graphitic carbon nitride, a two-dimensional layered material that is similar to graphene, but which contains nitrogen.

They combined these ingredients in a quartz tube and heated them for 62 hours at up to 600°C. The result is a liquid containing flakes of TGCN that can be removed by filtering or peeling them off the quartz tube.

The material is at an early stage of development and Professor Cooper believes the next stage in the research is to explore its properties.

He said: “The creation and analysis of this material is just the first step. We now have a lot more work to do to scale it up and prove function in electronic devices.”

Quasi-solid zinc metal batteries could power the wearables of tomorrow
Computational electromagnetics: Know your tools for they shape our future
Chameleon metals change their surface structure in response to heat
Smart Ships on the Horizon