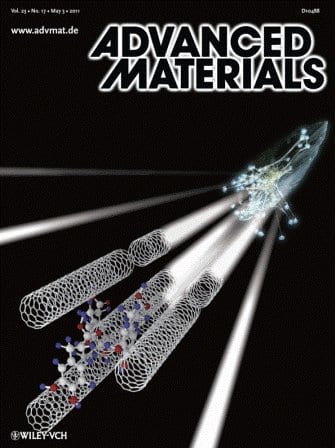 The exceptional mechanical properties of carbon nanotubes (CNT) have heralded it as the next generation super-strength fibre material. Researchers’ imaginations have run wild with the idea that these nano-sized carbon structures might allow us to build the worlds’ strongest cables, fibres and fabrics. From space elevators to bulletproof vests, CNTs find an immense field of application. Moreover, such materials could have a secondary functionality due to the ballistic electron transport possible through CNTs.

Whilst a vast development in the preparation of high-strength CNT-based fibres has taken place, many f

ibres still do not exceed strengths that have been achieved for hydrocarbon-based materials such as Dyneema and Kevlar. The majority of CNT fibres are prepared via a spinning process, either from solution or solid-state. Spun fibres undergo a twisting and post-spinning densification process to improve the mechanical properties. It is at this point that researchers from the KAIST Institute in South Korea have altered the preparation strategy, introducing an infiltration step to introduce polymeric cross-linking molecules. Mussel-inspired catechol-containing adhesive polymers suspended in methanol are absorbed into the twisted CNT-cable and cross-linked in a subsequent step.

The adhesive polymers investigated mimic proteins found in the adhesive foot of the marine mussel Mytilus edulis. These molecules undergo cross-linking, even in a marine environment, through chemical reactions between the catechol and amine groups in the proteins, as well as metal-coordination. Similar cross-linking reactions were performed on infiltrated CNT-cables; first through heat treatments, and secondly through iron-catechol coordination.

The strong binding of individual CNTs and the mussel-inspired matrix is easily seen when the cables are fractured and examined under an electron microscope. Most importantly, the tensile strength (strength to failure) of the treated fibres is increased by 500% over the CNT fibre alone. Even though the strength of a single CNT still dwarfs those reported here, the improvements observed when using the mussel-inspired adhesives are still commendable, especially when the scalability of fibre preparation is considered. With further modification of the cross-linker molecules, even higher strengths are likely possible.