A team at the University of Central Florida has developed an alternative route for functionalizing polymers using water-based chemistry. 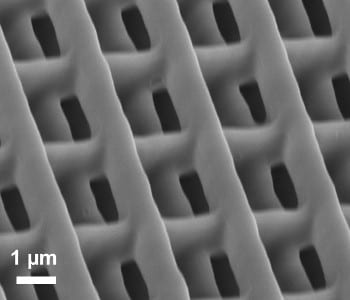 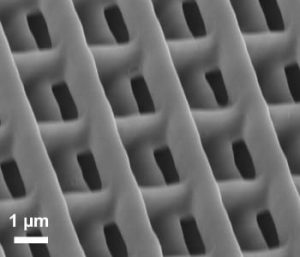 Scientists and engineers increasingly use micro- and nano-scale devices to solve problems in medicine, engineering, and basic research.  Polymeric materials are particularly well suited to such applications because they are inexpensive, robust, and can be chemically modified to tune properties and alter their interaction with the surroundings.  But when chemistries commonly employed to modify polymeric surfaces are used, particularly those based on organic solvents, the polymeric structures can swell and becomes severely distorted, losing critical form and function.

Now, a team at the University of Central Florida, led by Dr. Stephen M. Kuebler, has developed an alternative route for functionalizing polymers that uses water-based chemistry and large macromolecular amine.  The water-based approach minimizes swelling of the polymer and reduces transport of chemical species into the micro-structure.  Multi-functional macromolecular amines are used in place of smaller bifunctional amines, like ethylenediamine, to help further restrict the functionalization chemistry to the exterior of the polymeric structure.

The researchers demonstrated their new approach by fabricating three-dimensional “woodpile” micro-structures in a cross-linkable epoxide called SU-8.  Woodpile micro-structures are of specific interest because they exhibit novel optical properties such as tunable photonic bandgaps.  SU-8 was chosen because this material is increasingly used for applications in micro-electronics, micro-electromechanical systems, photonics, microfluidics, and sensors.  The group functionalized the woodpile structures using both their new approach and a conventional method, measured quantitatively the degree of distortion caused by the processes, and metallized the structures with copper, to demonstrate that the surfaces had been actively functionalized.  Experiments confirm that the new functionalization method causes no measureable distortion yet is equally effective for chemically modifying polymeric micro-structures.

Magnetic wood can shield against electromagnetic interference
A Catalyst for Sustainable Methanol
Not a Stretch: Flexible Hydrogels with Structural Color
Nanoscale antennas for optical data communication