Biophotonics – optical techniques for the study of biological molecules, cells and tissues – has evolved into one of the most important fields of photonics. 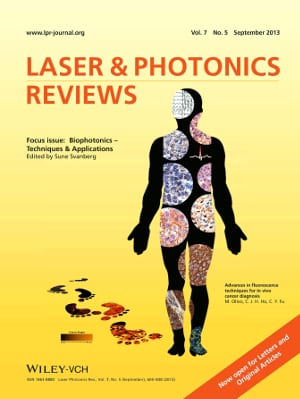 Biophotonics – optical techniques for the study of biological molecules, cells and tissues – has evolved into one of the most important fields of photonics. Its applications have become indispensable tools for clinical research, treatment and diagnostics.

Biophotonics has become a broad and important research area with its beginning about 30 years ago. In the early days, there were only a few pioneering groups doing research in this field – nowadays, its importance is, for example, reflected by the fact that Biophotonics is the largest subconference at the annual SPIE Photonics West conference in San Francisco, where this year almost 2,000 presentations on Biophotonics were given.

“Academic front-line research is accompanied by product development with a strong and growing impact on today’s clinical practice”, guest editor Sune Svanberg underlines in the editorial of a new special section of the journal Laser & Photonics Reviews, named Biophotonics – Techniques and Applications, which is dedicated to this rapidly evolving field. Svanberg is one of the biophotonics pioneers. He and his colleagues at Lund University, Sweden published their first regular biophotonics paper in 1984, i.e. shortly after he became professor of Physics and head of the Atomic Physics Division. Since 15 years he is also director of the Lund Laser Centre (LLC), and now after becoming senior professor at Lund University he is also part-time professor at the South China Normal University in Guangzhou.

“Laser & Photonics Reviews, being a key publication for authoritative reviews in a broad and quickly expanding field that now influences most aspects of human life, technology and industrialization, is certainly a most appropriate forum for presenting frontline developments in biophotonics”, says Svanberg. Eight biophotonics reviews are included in the current issue, illustrating both the status of some more established fields and also challenges addressed by new approaches.

Biophotonics relies heavily on the availability of efficient, reliable and cost-effective laser sources. Two reviews address this area. Fluorescence has been utilized from the early days of biophotonics, and the field is developing dynamically. One of the reviews reports on advances in fluorescence diagnosis to track footprints of cancer progression in vivo. Another one treats upconverting nanoparticles which are a class of recently developed luminescent biomarkers that can be superior to organic dyes and quantum dots. They can emit spectrally narrow anti-Stokes shifted light with quantum yields which greatly exceed those of two-photon dyes for fluence rates relevant for deep tissue imaging.

Raman spectroscopy provides direct mapping of molecular bonds and has substantial potential for tissue characterization. Another paper discusses how this technique can be made clinically accessible.

Scattering and absorption in human tissue limit the depth at which optical techniques can provide information and which image clarity can be obtained. Such issues are addressed in two reviews, one covering tissue optical clearing, the other discussing photoacoustic microscopy techniques which enhance penetration and clarity.

Svanberg himself and his colleagues contribute an article about a new technique that combines elements from tissue optics with atmospheric gas monitoring called Gas in Scattering Media Absorption Spectroscopy (GASMAS). It may be used to monitor free gas in pores or cavities for sinus cavity diagnostics and neonatal children surveillance.