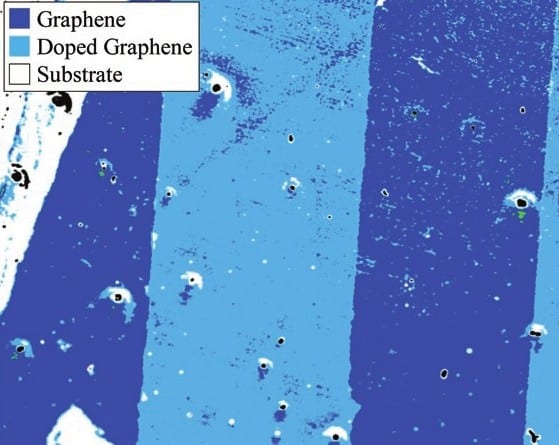 Researchers at the University of California, Riverside led by Cengiz S. Ozkan have developed a large-scale graphene metrology technique that paves the way for widespread industrial applications, ranging from semiconductors to energy devices.

Graphene is a carbon allotrope that consists of one-atom-thick planar sheets of carbon atoms. Thanks to its extraordinary electrical, thermal, and optical properties, this miracle carbon material eventually earned its discoverers a Nobel prize in Physics. The greatest challenge in employing graphene industrially, in areas such as energy, semiconductor fabrication, and thermal management, has been making it relevant at larger scales. This requires increasing the size of graphene itself and developing large-scale industrial metrology techniques.

Now the Ozkan group at UCR has made a significant stride in making graphene industry-ready by developing an industrial metrology technique for large-area graphene sheets that relies on fluorescence quenching phenomena. This method is capable of “seeing” chemically functionalized graphene regions and accurately identifying the number of layers in entire large-scale graphene sheets. For utilizing graphene in electronics, an industry-reliable metrology of doped pristine regions, and defect detection are amongst the fundamental needs.

The UCR scientists demonstrate the capability of their method by visualizing complex micron-scale patterns of graphene regions that are chemically modified by fluorine atoms. They went on to test their findings by analyzing the photophysical properties of functionalized and pristine graphene. “Our research demonstrates that fluorescence quenching metrology will provide a widely applicable and scalable characterization technique to visually map complex patterns of chemically altered regions on graphene sheets”, said graduate student Maziar Ghazinejad.

Due to its simplicity, small footprint, and high speed, fluorescence quenching metrology is now poised to address the chronic need for an industrial graphene metrology capable of visualizing the features that are being manufactured.