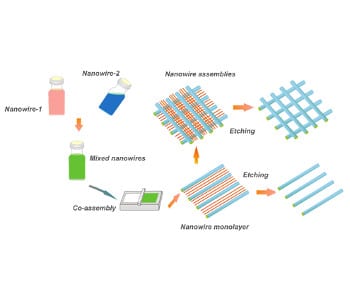 In contrast to rigid and opaque electrical devices, the successful fabrication of many modern optoelectronic devices including touch screens, organic light-emitting diodes (OLEDs), electronic displays, and solar cells, requires electrodes flexible, transparent and with high conductivity. To address extremely flexible transparent conducting electrodes to combine and balance optical transparency and electrical conductivity, Shu-Hong Yu and his research group from the University of Science and Technology of China (USTC) proposed a new nanowire assembly strategy to fabricate flexible transparent electrodes by precisely manipulating Ag nanowire networks. The results have been published on Dec. 1st in Angewandte Chemie International Edition (Angew. Chem.-Int. Ed. 2014, 53(49), 133477-13482) as a VIP paper with the title of “Manipulating nanowire assembly for flexible transparent electrodes”.

To demonstrate the stability of this new kind of nanowire assemblies, Yu’s team tested their mechanical properties and electrical properties immersion in liquid. After manipulating nanowire assembly, the nanowire electrodes keep their conductivity even the device was twisted in water or ethanol. To validate the practical application of current technology, Yu’s team tested and fabricated Ag nanowire transparent electrodes which were applied to a touch panel screen demonstration as shown in the inset of Figure 2, writing the characters “USTC” and “Yu lab”.

This versatile strategy will provide optimum possibilities for the large-scale fabrication of flexible and transparent electrodes exhibiting a good compromise between optical transparency and electrical conductivity.

This research project is sponsored by the National Basic Research Program of China, the National Natural Science Foundation of China and the Chinese Academy of Sciences.