Researchers from Chalmers University of Technology have shown that so called plasmonic metasurfaces, ultrathin nanostructured solid materials, can be used for reflective color displays if functionalized with conductive polymers. 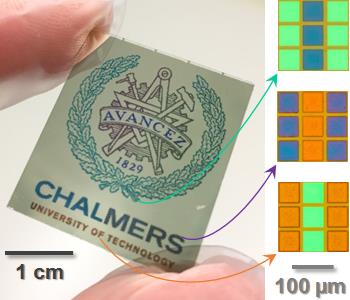 Reflective or paper-like displays are attractive because they provide much lower energy consumption than regular emissive displays (LED screens etc.) as well as comfortable viewing under ambient light conditions or outdoors. Existing devices, such as the KindleTM electronic reader, are based on electrophoretic ink, which has proven excellent for black and white displays. However, technologies providing reflective displays in full color remain strongly limited. To be of practical use, the material in such a display must be simple and cheap to prepare, even over large areas, while also being stable. The reflected colors should also be clear and intense, while still being possible to modulate with high speed and strong optical contrast in micro-scale pixels (typically ~100 µm, the resolving power of the human eye). 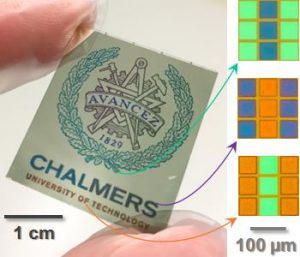 Researchers from Chalmers University of Technology have shown that so called plasmonic metasurfaces, ultrathin nanostructured solid materials, can be used for reflective color displays if functionalized with conductive polymers. The use of plasmonic nanostructures to generate colors is in fact an ancient method used already by the Romans and seen today in colorful old church windows, which contain noble metal nanoparticles. The newly developed metasurfaces contain continuous nanostructured metal films instead, so that conductive polymers can be grown electrochemically directly on the surface. By electrical control the polymers can also alter between a light absorbing and a transparent state, which makes it possible to switch the reflected color on and off. By patterning pixels with metasurfaces tuned for the primary colors red, green and blue (RGB) the research group could show generation of secondary colors like cyan purple etc. Further, the colors of the metasurfaces in their active RGB states as well as their off states (black) were shown to be very similar to ink produced by a laserjet printer on ordinary paper. This shows that the technology is applicable for electronic readers. Last but not least, the new 2D material consisting of metasurface and polymer is flexible, which makes the technology compatible with displays that are . Such reflective color displays should be especially useful for large-area energy-efficient screens. One particularly interesting application is foldable electronic posters for advertisement or information display at well-lit locations.