Study offers blueprint for creating machines at the nanoscale and is essential step towards new class of nanodevices. 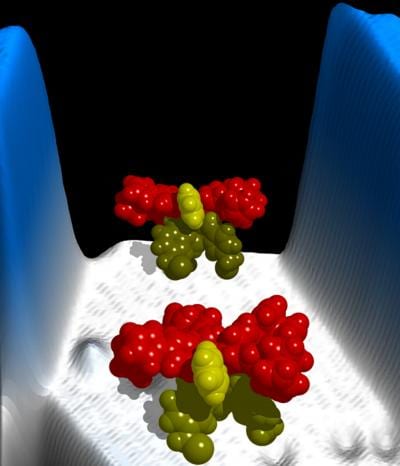 This illustration shows the structure of the molecular motors designed by the international team of scientists. Image: Saw-Wai Hla, Ohio University.

An international team of scientists has taken the next step in creating nanoscale machines by designing a multi-component molecular motor that can be moved clockwise and counterclockwise. Although researchers can rotate or switch individual molecules on and off, the new study is the first to create a stand-alone molecular motor that has multiple parts, said Saw-Wai Hla, an Ohio University professor of physics and astronomy who led the study with Christian Joachim of A*Star in Singapore and CEMES/CNRS in France and Gwenael Rapenne of CEMES/CNRS.

It’s an essential step in creating nanoscale devices—quantum machines that operate on different laws of physics than classical machines—that scientists envision could be used for everything from powering quantum computers to sweeping away blood clots in arteries.

In the study, published in Nature Nanotechnology, the scientists demonstrated that they could control the motion of the motor with energy generated by electrons from a scanning tunneling microscope tip. The motor is about 2 nanometers in length and 1 nanometer high and was constructed on a gold crystal surface.

t a temperature of minus 315 degrees Fahrenheit, the motor could move independently through thermal excitation. When scientists cooled the sample to minus 450 degrees, the motor stopped rotating. The researchers selectively applied electron energy to different parts of the motor to prompt it to move clockwise and counterclockwise.

“If we want to build an actual device based on this motor, we would install electrodes on the surface to create an energy source,” Hla said. To construct the molecular motor, the scientific team designed a stationary base of atoms that is connected to an upper moving part by one atom of ruthenium, which serves as the “ball bearing.” The upper piece of the motor features five arms made of iron atoms. The researchers made one arm shorter than the others to be able to track the motion of the machine. The entire device is held upright by using sulfur as an “atomic glue” to secure the motor to the gold surface, Hla explained.

The scientists now plan to use this model to build more complex machines with components that could be automated, Hla said.