The first images of the environment around an energetic X-ray binary star could help expand our understanding of planet and star formation. 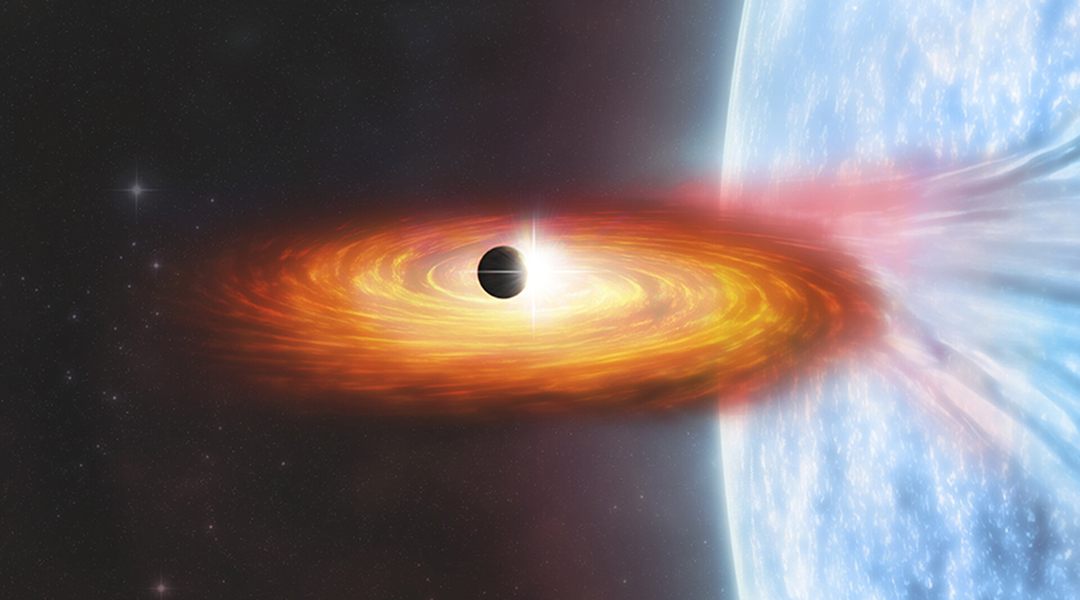 Exoplanets were first discovered around 30 years ago orbiting an extremely energetic star known as a pulsar. Thousands more have been discovered since, but research has focused on calm and long-lived stars, like the Sun.

In recent years, questions have returned as to whether exoplanets and other orbiting companions can form in extreme stellar environments. To help answer them, Myriam Prasow-Émond and collaborators at the University of Montreal have published the first high-contrast images of objects orbiting the X-ray binary star, RX J1744.7-2713.

X-ray binaries consist of a pair of stars orbiting each other. One is a normal star, like the Sun, and the other is a collapsed star, which are objects with similar masses but concentrated into a much smaller region, like a white dwarf or black hole. Material from the normal star is stripped and attracted towards the collapsed star, and through this process, huge amounts of X-ray radiation are emitted, creating some of the most extreme environments in our galaxy.

The authors have, for the first time, taken a technique from exoplanet searches and used it to image the X-ray binary system to search for orbiting companions. This system is around 1.2 kiloparsecs from Earth and is believed to be around 60 million years old.

The results of these observations, shown below, focus on distances out to 5000 astronomical units (AU) from the central X-ray binary. At this distance from the Sun, we would have passed the most distant known planet Neptune (30 AU) and the Kuiper Belt of asteroids (30 – 50 AU), and would be deep into the theoretical Oort Cloud (> 2000 AU).

The images were produced by directly imaging the X-ray binary system with the Keck Telescope’s near-infrared camera. Since the central source is the brightest object in the system, it had to be obscured using a mask known as a coronagraph, allowing the dimmer surrounding sources to become visible.

The images highlight 21 possible companions. However, it is unlikely that all of these sources are part of the X-ray binary star system. The authors therefore conducted several tests to find out which are the most likely companions.

First, they assessed whether the sources’ proximity to the X-ray binary was due to random chance or a real gravitational attraction. Using a combination of simulated and observed data, they measured how the number of astronomical sources was expected to vary across these images. With this, they were able to calculate each source’s probability of chance alignment, identifying seven objects that were likely part of the X-ray binary system.

Next, they looked at the colors and brightness of the observed sources. Stars and exoplanets follow specific life cycles which affect their color. By comparing their observations to these models, the team hoped to remove anything that was significantly different and, therefore, likely unrelated to the X-ray binary system in question. From this analysis, the authors ruled out several sources as distant black holes and faults in parts of the image.

When the color-magnitude and chance alignment analysis were combined, the authors concluded that three sources were likely orbiting companions of this system: B, D, and J in the above images.

Are the companions exoplanets?

A closer look at these companions, however, suggested they were not exoplanets, as the authors expected. The color and magnitude of sources in a system at this distance were much more consistent with those of stars. “When I found stellar masses, I had to completely change my thinking” said Prasow-Émond. “What does it mean that we have stellar mass [objects] and not sub-stellar masses?”

Their observations suggest that this system, previously thought to only contain the central binary star, may be much more complex, hosting multiple co-orbiting stars. “This result opens the door to redefining our comprehension of XRBs” said Prasow-Émond.

Another paper is due to be published soon detailing their observations of a further 13 XRB systems. This would help establish whether or not RX J1744.7-2713 is the exception.

More detailed observations of the companions’ orbits around the central X-ray binary are needed to confirm this discovery. However, these images will help inform the discussion around the formation of stars and exoplanets. “In 5 or 10 years it might be different, but for now we’re just exploring and trying new methods on XRBs and finding out what it means,” concluded Prasow-Émond.