Astronomers capture images of a four billion-year-old relic that fell from the theorized Oort Cloud that encircles our Solar System. 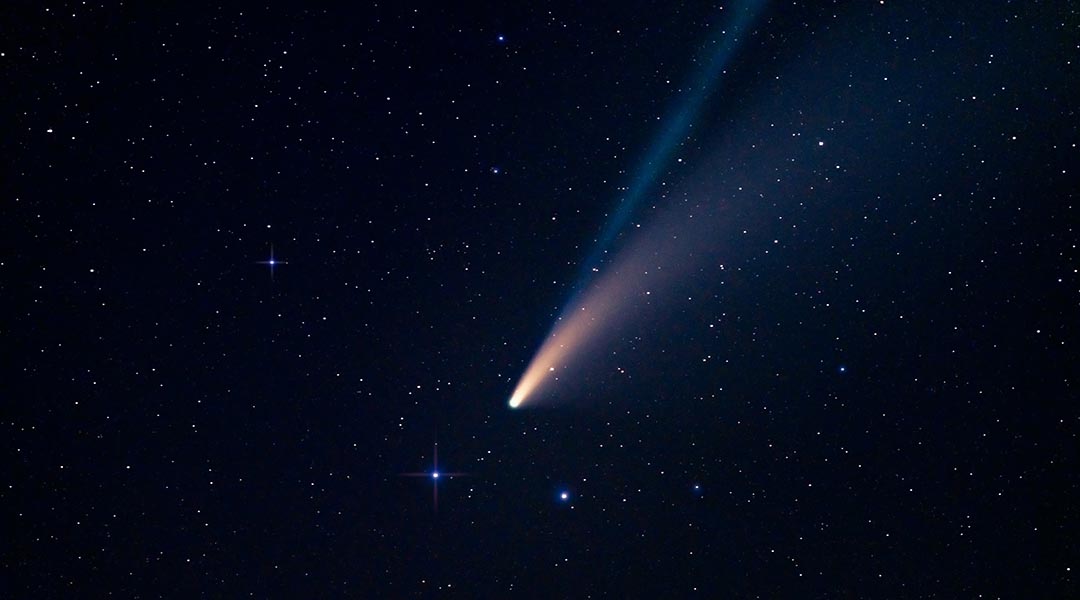 Comets are among the oldest objects in our universe. Icy bodies that travel the cosmos, they are guided through by the gravity of stars and planets like a giant game of pin ball.

This week, UCLA researchers have provided information on an enormous comet that is more than twice the size of Rhode Island, at 80 miles (almost 130 km) across, heading toward the edge of our Solar System at 22,000 mph (~35,000 km/h). What’s so exciting about the comet named Comet C/2014 UN271 is that it has a nucleus of ice and dust that is roughly 50 times larger than other known comets, making it one of the largest ever observed by astronomers.

In a recent paper published in the Astrophysical Journal Letters, David Jewitt, professor of planetary science and astronomy at UCLA, and his colleagues determined the size using NASA’s Hubble Space Telescope. It is estimated to have a mass in the range of 500 trillion tons, which is one hundred thousand times greater than the mass of a typical comet found much closer to our Sun.

“This comet is literally the tip of the iceberg for many thousands of comets that are too faint to see in the more distant parts of the solar system,” Jewitt said in a statement. “We’ve always suspected this comet had to be big because it is so bright at such a large distance. Now we confirm it is.”

Comet C/2014 UN271 was first observed in 2010, when it was 3 billion miles away from the Sun. Since then, it has been studied by ground and space-based telescopes, and in January of 2022, when the comet was roughly 2 billion miles away, the team used Hubble to take five photos, which they combined with radio observations to complete their analysis.

The challenge was distinguishing the solid nucleus from its rather large and dusty coma — the cloud of dust and gas that envelopes it. The comet is currently too far away for its nucleus to be visually resolved by Hubble. Instead, the data that could be gathered showed a bright spike of light at the nucleus’ likely location.

Jewitt and his colleagues next made a computer model of the surrounding coma and adjusted it to fit the Hubble images. They then subtracted the glow of the coma, leaving behind the nucleus, and compared the brightness to earlier radio observations from the Atacama Large Millimeter/submillimeter Array, or ALMA, in Chile. The new Hubble measurements are close to the earlier size estimates from ALMA, but suggest a darker nucleus surface than previously thought. “It’s big and it’s blacker than coal,” Jewitt said.

Comet C/2014 UN271 is thought to have originated in the Oort cloud, a theoretical spherical shell of icy bodies that encircles our Solar System — like a big, thick-walled bubble made of icy debris. It was first proposed in the 1950s by Dutch astronomer Jan Oort, and many believe it to be the source of comets.

According to Jewitt, the Oort cloud’s comets were tossed out of the Solar System billions of years ago by the gravity of the outer planets. When perturbed from by the gravitational tug of a passing star, the comets fall from the Oort Cloud and travel back toward the Sun.

Astronomers think that Comet C/2014 UN271 has been falling toward the Sun for well over 1 million years. Jewitt thinks the Oort cloud extends from a few hundred times the distance between the Sun and the Earth to at least a quarter of the way out to the distance of the nearest stars to our sun, in the Alpha Centauri system.

It remains a theory, as the cloud is too faint and distant to be directly observed by current instruments, but perhaps future instruments will provide answers. “This means the solar system’s largest structure is all but invisible”, Jewitt said.

Evolution of the Universe simulated in a lab
Screw-propelled robots could enable mining in space
Nobel Prizes 2019: Physics
How accurate are our models of rotating neutron stars?