The true colors of stars

Stars are depicted using different colors, but are they accurate? A new scientific color palette aims to put misrepresentations to rest. 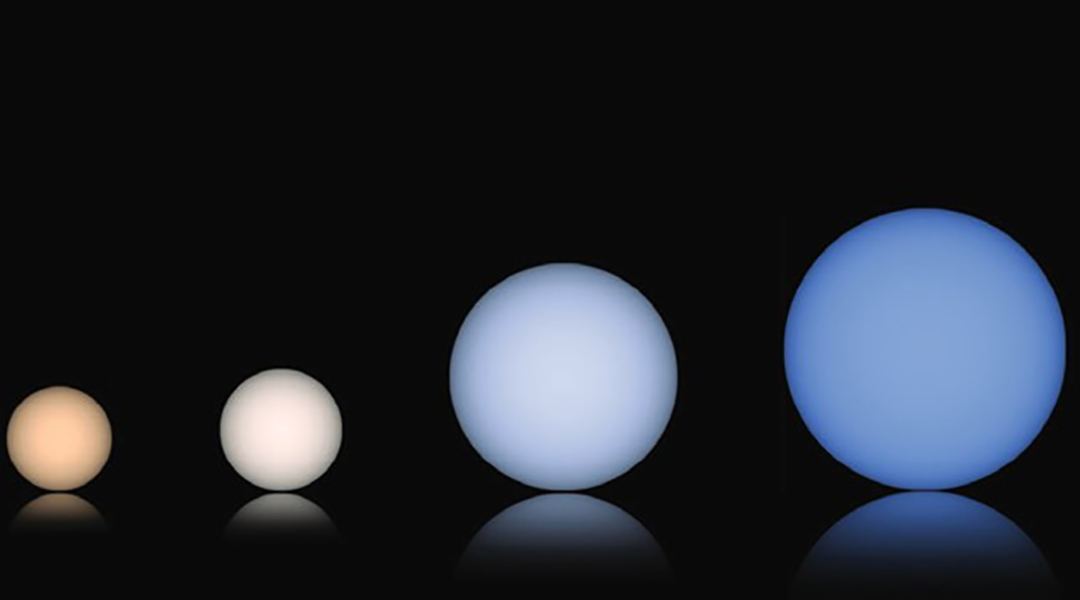 In a study published in the journal Astronomical Notes, scientists from Georg-August-Universität Göttingen and Max-Planck-Institut für Sonnensystemforschung developed a method to compute the colors of stars as they would appear to the human eye.

“There are many representations of stars in books or on the internet, but we wondered how different stars would actually look in terms of color,” said Jan-Vincent Harre, one of the library’s authors, in an email. “For instance, are red dwarf stars actually red or do they look different [to the naked eye]?”

Harre and his colleague René Heller used their system to not only compute the true colors of stars, but also presented red–blue–green and hexadecimal color codes that can be used for digitized color representations. The star color library is the first of its kind and could help to unify colorful representations throughout the scientific literature and the media.

The color codes were developed using simulated spectra for a range of stars with temperatures ranging between 2,300 and 55,000 K to which the scientists applied matching functions representing the three sets of receptors in the eye that respond to red, green, and blue light.

As expected, some color representations of stars appeared to be a bit inaccurate — for example, red dwarf stars actually look orange to the human eye and old white dwarfs appear pale orange. On the other hand, the results of the analysis validated an absence of yellow, green, cyan, or purple stellar types that sometimes pop up in scientific books and articles.

In their study, the researchers computed the colors of stars as seen from space, as a number of factors might alter star color for an observer on Earth. These include scattering as a result of the Earth’s atmosphere, as well as stellar scintillation — the refraction of starlight as it travels through the air in our atmosphere.

“This effect [scintillation] in particular makes it hard to assign a color to a star from Earth,” explained Harre. “We tested the effect of the absorption in the atmosphere, which we found has a small effect on the color. However, the other effects are probably more significant than this.”

In addition to a star’s temperature, the researchers included the impact of stellar rotation on observed colors. Rotation leads to a phenomenon called rotational spectrum broadening, which is a special example of the Doppler effect where the frequency and therefore color of light seen by an observer will change as the light source moves. The physicists found that even rapid rotation of a star resulted in insignificant changes in its perceived color.

Finally, the library also took into account the Purkinje effect, which evolved as a consequence of dark adaptation. In low light situations, the sensitivity of the eye shifts toward the blue end of the spectrum, making reds appear darker and blues brighter. The library doesn’t take this effect into account, so the perceived color of a distant star might differ slightly from the generated color if observed from space with an unaided human eye.

“Our color codes are determined as if the stars were observed under standard illumination, which is admittedly a somewhat artificial experimental setup for a hypothetical ‘by-eye’ observation from space,” added Harre. “In a real space-based observation of a star, the Purkinje effect could lead to a slight difference in the perceived colors compared to our color codes.”

The computer code, Spec2Col.py, is freely available and can be used to compute digital colors codes for any type of input spectrum. “It will be useful in any digital representation of a star, especially in press releases, public science talks, and educational content for the public,” said Harre.

“This, we hope, will offer authors of scientific articles or content creators the chance to use an accurate standard for their stellar representations, and thus give the audience a more realistic idea of how certain stellar types really appear,” he added.

A novel vaccine additive shows good safety profile
Does responsible climate leadership include research into solar geoengineering?
Better than reality: NASA scientists tap virtual reality to make a scientific discovery
The best way to study a lake? Float on top of it