ICN2 and UAB researchers have just reported a new type of fast-response photochromic film that they have developed using oil-filled polymeric cores. 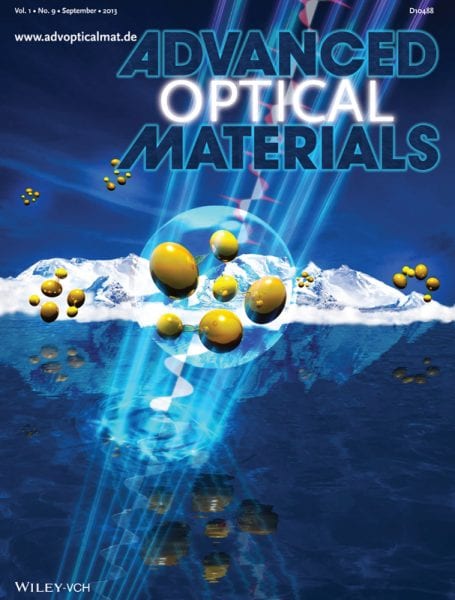 ICN2 and UAB researchers have just reported a new type of fast-response photochromic film that they have developed using oil-filled polymeric cores. The team, led by Professor Daniel Ruiz-Molina, Group Leader of ICN2’s Nanostructured Functional Materials Group, and Dr Jordi Hernando, from the Department of Organic Chemistry at the Universitat Autònoma de Barcelona (UAB), described their work in the cover article of the September 2013 issue of Advanced Optical Materials with fellow authors Claudio Roscini y Nuria Vázquez-Mera. The artwork (pictured) represents the response of a oil-core capsule upon irradiation.

The researchers have also applied for a patent PCT/ES2013/070132 for the new fast responsive photochromic materials since they offer improved efficacies to that of existing products in the market, but with lower fabrication costs and improved integration processes. The manufacturing of photoprotective coatings (e.g. for smart windows, agricultural films or helmets) are some of the main commercial uses expected for this family of photochromes.

Photochromic materials undergo a reversible colour change (usually from a colourless state to a coloured one) upon irradiation by UV-Vis light. They have found niche applications as photoprotective coatings in smart windows and ophthalmic lenses. However, the widespread adoption of these materials for a greater scope of practical applications has been limited by the fact that, when dispersed in the polymer matrices required for these applications, their colour changes are drastically slower. This is because the polymer chains interfere with the interconversion between the coloured and non-coloured states of the photochromic molecules.

Dr Ruiz, Dr Hernando and colleagues sought to devise a new class of photochromic materials that undergo rapid colour changing even when dispersed in polymeric matrices. They developed a material in which the photochromic component is encapsulated in oil-core, stable polymeric capsules.

When this component is in a liquid environment such as the oil, it interconverts at solution-like rates. The encapsulated photochromic component, and the corresponding polymeric matrices (polystyrene, PMMA, etc.) containing the capsules, both change colour 10-times faster than does the photochromic component when it is directly dispersed in into these polymers. The fading rate of the encapsulated photochromic is independent of the shell material of the capsules (polyamide, polyurethane, etc.) and of the polymeric system in which the capsules are dispersed.

Fast colour-changing: at least ten-times faster than those of the photochromic agent when directly dispersed in the polymer;

– Independent of the capsule shell material and of the polymeric system in which the capsules are dispersed;

Possibility of colour combinations: by encapsulating more than one photochromic agent within the same shell;

Extended lifetime: the oil filled capsules protect the photochromic agent, thereby extending its lifetime compared to when it is directly dispersed in the polymer.