A particularly intriguing terahertz modulator has been created by Dr. Tianlong Wen, Prof. Qiye Wen and their colleagues. 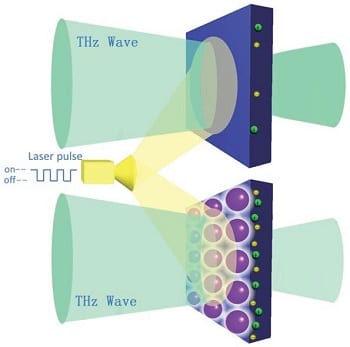 The terahertz region of the electromagnetic spectrum (covering ~0.1 – 10 THz corresponding to wavelengths from 3 mm to 30 µm) is a hotbed of scientific and technological activity based, in part, on the unique attributes of radiation at these frequencies. This includes spectroscopic imaging with sufficient spectral and spatial resolution through materials that are opaque at other spectral ranges (e.g. microwave, infrared, or visible) and the promise of short-range high-bit-rate data transfer far beyond existing modalities. To advance beyond demonstration towards low-cost real-world applications requires continued development of devices such as modulators and phase shifters to adeptly control terahertz waves. Indeed, groups around the globe are exploring novel device concepts using metamaterials and plasmonics. 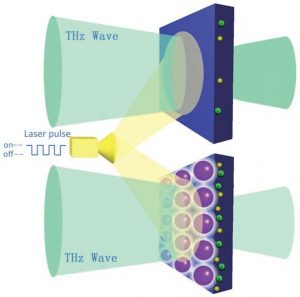 Along these lines, a particularly intriguing terahertz modulator has been created by Dr. Tianlong Wen, Prof. Qiye Wen and their colleagues. They report on a broadband optically-controlled silicon modulator with impressive amplitude modulation accomplished by depositing a single monolayer of gold nanoparticles on the silicon surface. Crucially, the plasmon resonance of the gold nanoparticles strongly enhances carrier generation in the insulating silicon substrate upon optical excitation. This is important because insulating silicon is transparent to THz radiation (modulo Fresnel reflection losses). With sufficient carrier excitation the reflectivity of the silicon increases, leading to a corresponding decrease in the transmission and thereby modulating the THz beam. The plasmonic layer leads to a dramatic improvement of the modulation depth: for 100 mW of incident optical power, the absolute transmission only changes by ~3% for the bare silicon device in comparison to nearly 30% for the device with a plasmonic layer for an order-of-magnitude improvement. Further, in this elegant approach the THz beam is “blind” to the gold nanoparticle layer, meaning that there is no additional insertion loss.

These results represent an interesting example of a multiscale device where an important performance metric is fruitfully augmented using nanoscience. It will be interesting to follow subsequent developments of this idea to see if the incident optical power could be further reduced to achieve a given modulation amplitude. One could also envision, for example, using metamaterials resonant at THz frequencies in conjunction with gold plasmonic particles to further optimize the modulation response.