What’s new in hydrogen production? Sustainable energy is a hot topic, and these snapshots will update you on what materials are being optimised right now for the HER.

Late last year, we took a look at some of the new materials coming out of our global laboratories for the purpose of catalyzing the oxygen evolution reaction (OER). Part of the overall reaction for water splitting, the kinetics for this reaction are known to be a rate-limiting step in the process. The other reaction involved, no less important for the future generation of clean, sustainable energy, is the hydrogen evolution reaction (HER).

So what new materials and ideas have recently been published for HER electrocatalysis?

The use of noble metal catalysts on carbon supports is known, but the key challenge is to reduce the amount of metal used without compromising the catalytic performance of the material. One way to do this is to replace part of the noble metal content with a low-cost, earth-abundant non-noble metal, which is exactly what researchers from Zhejiang Sci-Tech University, China, have done. They used a simple electrospinning and graphitization technique to encapsulate Pt–Cu alloy nanoparticles in carbon nanofibers. The nanoparticles were found to be distributed uniformly, and the green nature of this synthesis technique is in keeping with the sustainability aspect of its intended application. Indeed, their alloy/carbon composite showed promise for HER: the alloy/nanofiber produced a Tafel slope of 68 mV dec-1, which was better than the 104 mV dec-1 slope recorded for pure Pt nanoparticle/nanofiber composites. It also showed a small overpotential of 71 mV in acidic media at a current density of 10 mA cm-2. The researchers suggest that these values are the result of the synergistic interaction between the two metals, with the alloy structure helping the copper to resist the oxidation that normally limits its use in such applications.

A different team of researchers from China’s Inner Mongolia University used a nanocasting strategy to develop a series of ternary structured electrocatalysts from all non-noble metals instead. Their (CoP)x–(FeP)1–x nanorods were decorated onto graphene nanosheets via infiltration of the hydrated metal chloride precursor solutions through a sacrificial template.

The HER performance of this hybrid catalyst was very good, achieving a Tafel slope of just 52 mV dec-1 for the (CoP)0.54(FeP)0.46/graphene sample, with overpotentials at 10 mA cm-2 of only 57 mV in acidic solution and 97 mV and alkaline conditions. This tolerance to such a broad range of pH conditions is especially interesting. Polarization curves measured before cycling match those measured after 3000 cycles, suggesting a good stability of the material’s electrocatalytic properties in both types of media.

The highly novel tantalum nitride (Ta3N5) was the subject of another investigation, this time from the University of Queensland, where researchers used a graphene oxide template to generate Ta3N5 nanometers via a three-step process. The hydrolysis and calcination steps formed a 2D tantalum oxide layer, which was then converted to the desired product during a final nitridation step. The highly crystalline structure of the nanomeshes matched that of bulk Ta3N5, and the researchers discovered that they could control the average size and distribution density of the pores by changing the ratio of TaCl5 precursor/graphene oxide used in the first step, with higher ratios leading to fewer, smaller pores. They also suggest that their synthesis strategy could be generalized to work for other materials, and demonstrated a tenfold improvement in photocatalytic hydrogen production using their nanomesh as compared to the bulk. 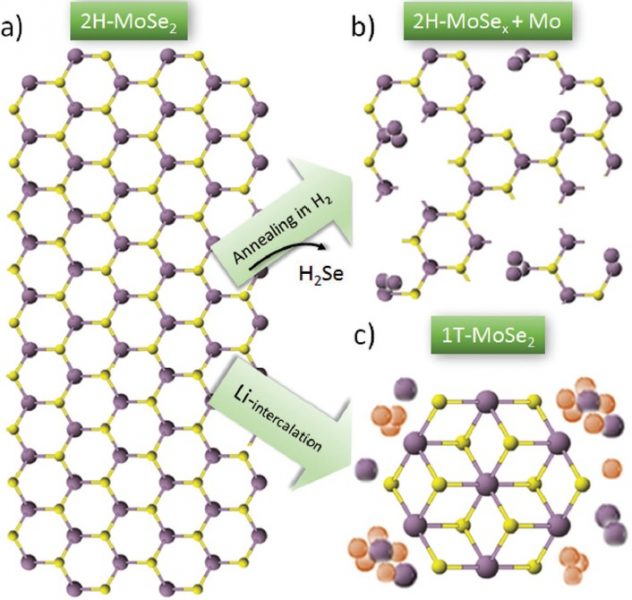 Our final snapshot comes from Italy, where researchers have been exploring how to increase the number of electrocatalytically active sites for the transition metal dichalcogenide MoSe2. In its metallic phase, not only the unsaturated edge sites but also the basal plane of MoSe2 is catalytically active; however, the metallic phase readily converts to the more stable trigonal prismatic (semiconducting) phase, with the reverse being unfavorable and therefore generally too costly for realization on an industrial scale. Starting with bulk crystals, these researchers used liquid-phase exfoliation to form heterostructures from single- or few-layer MoSe2 flakes and either graphene or carbon nanotube scaffolds. This was followed by annealing in H2 and a chemical bath step, leading to the creation of Se vacancies and, consequently, the in-situ conversion of MoSe2 from the semiconducting to the metallic phase. The demonstrated techniques are scalable, and the MoSe2/carbon electrodes show good HER performance, with Tafel slopes down to 54 mV dec-1.

Want more? If your work has a focus on water splitting, check out these articles: