Efficient radiative pumping of polaritons in a strongly coupled microcavity

This analysis demonstrated that the polariton states are most likely formed when the excited dye molecules in the cavity emit a photon, with this photon then directly exciting the photon-like part of the polariton. 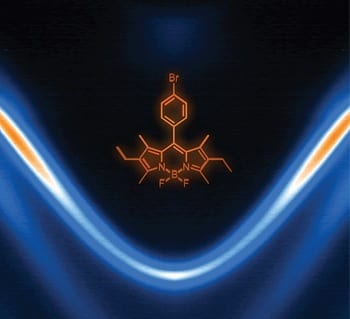 When two optical-mirrors are brought close together, they are able to trap light by acting as an optical cavity. If a material that can either absorb or emit light is placed into this cavity, then the trapped light and the material can interact with one another. These interactions result in some interesting physics, with in some cases new ‘hybrid-particles’ being formed in the cavity called ‘polaritons’. Such polaritons can be thought of as being a mixture between light and matter, and have been described as being a form of ‘liquid-light’. 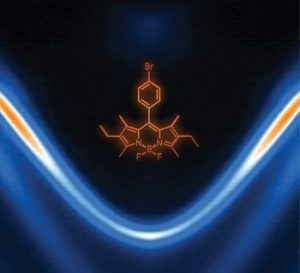 Professor Lidzey and his team created optical cavities based on two highly reflective mirrors placed either side of a layer of fluorescent dye molecules, that are able to efficiently absorb and emit light. To explore the properties of the system, a laser was shone into the cavity that ‘excited’ the dye molecules, with the cavity then being found to emit light. Careful experiments demonstrated that this light emission came from the mixed ‘light-matter’ polariton states. To understand how the polariton states were formed in the cavity, different theoretical models were used to describe the distribution of light emission from the cavity as a function of wavelength (equivalent to color), temperature and emission-angle (defined with respect to the surface of the cavity mirror). This analysis demonstrated that the polariton states are most likely formed when the excited dye molecules in the cavity emit a photon, with this photon then directly exciting the photon-like part of the polariton. Importantly, it was found that it was necessary to include direct interactions between molecules in the cavity to build up a full picture of this process. This analysis is very relevant for the design and construction of new types of lasers that can operate with very low power requirements.