A dual photodynamic and chemo therapy for skin cancers is proposed. 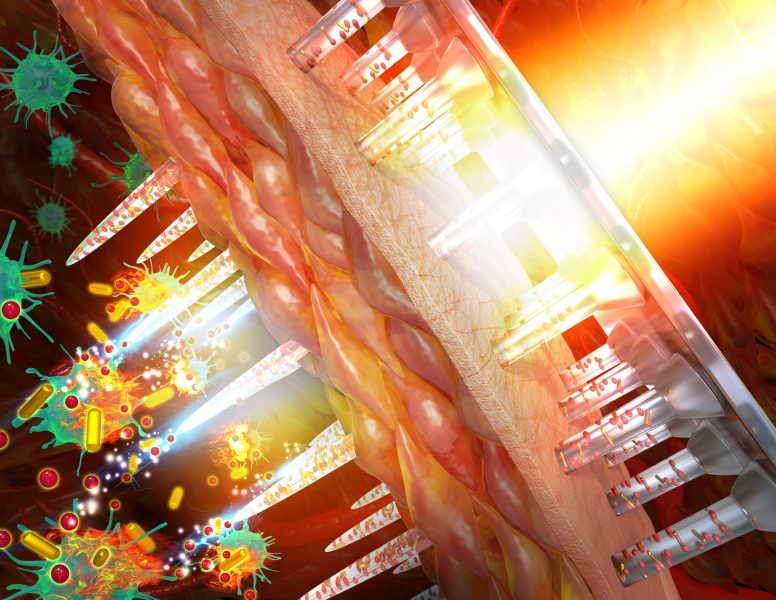 It is estimated that in the US, one in five people will be diagnosed with a skin cancer by the time they reach 70. It is such a common disease in the US, that more people are diagnosed with it than all other cancers combined. The most common treatment for skin cancers is to have them surgically removed. This process can leave behind residual cells that are often difficult to eliminate.

To circumvent the difficulties associated with surgery, treatment methods such as radiotherapy, chemotherapy and photodynamic therapy are also employed. Each of these has disadvantages, and as a consequence it has been proposed that combination therapies, that utilize 2 or more approaches may be the most effective way to treat skin cancers. 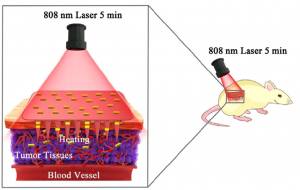 A Chinese research group previously reported a dual therapy approach for treating skin cancers using photodynamic- and chemo-therapy. This approach involved treatment of mice with a known chemotherapeutic agent, and injection of a photoactive substance into the tumor. On exposure of the tumor to near infra-red light, the photo-active substance heated up to 60 °C, aiding the destruction of the cancer. However the process was complex, requiring separate administration of the two therapies, and three iterations to be effective.

The latest development in this research, published in Advanced Therapeutics, simplifies the administration process significantly. Both the photoactive and the chemotherapeutic agents were encapsulated in dissolvable microneedles. These needles are inserted into the skin and their therapeutic load is delivered directly to the target of interest, and then the needle casing dissolves. This protocol enabled both agents to be administered at the same time.

The research team showed that when used in mice, their dual therapy destroyed the cancer after only one treatment, and no recurrence was observed. In contrast, the mice treated with the chemotherapy alone, demonstrated only slowed tumor growth. Treatment with the photodynamic therapy alone, initially appeared to have eliminated the cancer, but recurrence was observed.

This excellent therapeutic outcome is believed to be due to a synergistic effect between the two treatments. The research team hopes that these promising results will lead to translation of this therapy into a clinical setting.