Leading nanotechnology scientist wins award for research inspired by nature and its ability to create materials. 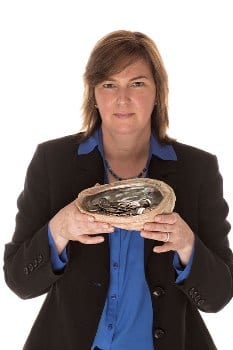 Dr. Angela Belcher, a materials chemist and one of the world’s leading scientists in nanotechnology has been as the recipient of the 2013 $500,000 Lemelson-MIT Prize. Belcher has drawn inspiration from nature and its ability to create materials.

She believes that if organic and inorganic materials can combine in nature to produce exquisite structures, similar processes can be used in the lab to create things of which nature hasn’t yet dreamed. She has used these lessons in biology to design novel, hybrid organic-inorganic materials that have been used to create environmentally-friendly batteries and clean transportation fuel, among other inventions with both commercial and social value. The Lemelson-MIT Prize, which honors an outstanding mid-career inventor dedicated to improving our world through technological invention, has been awarded annually since 1995.

The current W.M. Keck Professor of Energy in Materials Science and Biological Engineering at MIT and David H. Koch Institute for Integrative Cancer Research faculty member was initially motivated by the abalone shell during her time spent by the ocean as an undergraduate at the University of California at Santa Barbara (UCSB). The abalone shell was created by the abalone sea snail throughout millions of years of evolution and is comprised of 98 percent calcium carbonate – an inorganic compound – and two percent organic protein. The combination makes the shell 3,000 times tougher than its geological counterpart. The shell motivated Belcher to question how biology could be engineered to make new materials for human use. Today Belcher’s work is focused on convincing biology to work with elements in the periodic table to create new, advanced and environmentally-safe materials.

“The full implications of Angela Belcher’s work are only beginning to be realized and yet the applications already appear to be far-reaching,” said Evelyn Hu, co-founder of Belcher’s two companies and the Gordon McKay Professor of Applied Physics and Electrical Engineering at Harvard University. “Her inventions are always linked back to her profound passion and compassion for society, and her desire to improve the quality of life for others.”

It took 50 million years for the abalone snail to perfect its ability to build its shell – a process that occurs at the DNA level. Belcher invented a process in which she genetically engineers the DNA of benign bacterial specific viruses to interact with a breadth of inorganic materials. This is repeated in a rapid, Darwinian-like way with billions of viruses at a time until only the most promising blends of genetic information have survived. The process has resulted in one of Belcher’s most encouraging inventions to date: the high-powered, biologically-based battery. The battery is inexpensive to produce and nontoxic. Currently it can power small electronic devices like a laser pointer or an LED light, although Belcher’s goal is to scale the battery to run a hybrid car.

Belcher co-founded Siluria Technologies in 2007, which leverages her process to cheaply convert low-value methane gas into high-value liquid transportation fuel. Siluria is the first company to offer a commercially viable path for the use of natural gas as a real alternative to petroleum.” Belcher’s process is also being used in medical imaging devices to detect cancer in its earliest stages as well as to develop clean processing for electronics manufacturing, solar fuels and carbon dioxide sequestration and storage. Her dream has always been to develop new paths for clean synthesis of materials and devices modeled on the clean processing of natural organisms. She co-founded Cambrios Technologies, which develops electronic materials for transparent coatings used for touch screens, LCDs, ePaper and more. Cambrios is working with some of the world’s largest electronics corporations, and its technology is used in several commercially-available consumer devices including desktop monitors, smartphones and All-in-One computers.

Next Belcher will continue to focus on some of the biggest global challenges including water, and how she can develop materials to purify water for the agricultural, pharmaceutical and energy industries. She is also pioneering methods to use nanotechnology to image early stage cancers and improve outcomes following cancer surgery.

“Angela Belcher is an extraordinary inventor. She has taken a single idea and applied it to develop a remarkable portfolio of inventions that span a multitude of industries and will ultimately benefit business, society and the environment,” said Joshua Schuler, executive director of the Lemelson-MIT Program. “Most impressive is that Angela never fails to remember the immense value of youth mentorship and its ability to inspire the next generation of inventors who, like Angela herself, will continue to improve the world through their discoveries.”

Belcher will plan to allocate a portion of her award money to the development of outreach programming focused on getting others, especially youth, excited about science – a cause she has invested in all her life. As an undergraduate at UCSB Belcher helped to establish the Equal Opportunity Program in Science which provides first-generation, college-bound minority women with a head start program. Prior to MIT, Belcher taught at the University of Texas at Austin. While there, she was a key contributor to a new curriculum in chemistry, math and biology that involves classroom teaching as well as one-on-one mentoring services for undergraduate students to help them in science.

Belcher has spoken widely and tirelessly to student groups around the world about science. She visits elementary school classrooms, including those of her own children, where she hosts “Chemistry Circuses,” inspiring the young students by helping them to isolate DNA from their cheeks or build their own solar cells. She often mentors middle school girls in science and math, and has worked with IBM to provide lectures on Nanoscience for high school students around the country.

“We applaud Dr. Belcher for her progressive yet environmentally-sensitive inventions, which are based on the miracles of the natural world. However, it is her commitment to teaching and supporting our next generation of American students in the areas of science, technology, engineering and math that deserves our deepest thanks,” said Lemelson Foundation Chair Dorothy Lemelson.

Belcher will accept the award and present her accomplishments at the Massachusetts Institute of Technology (MIT) during the Lemelson-MIT Program’s seventh-annual EurekaFest, a multi-day celebration of the inventive spirit, June 20 – 22.

The Lemelson-MIT Program is now seeking nominations for the 2014 $500,000 Lemelson-MIT Prize. Please contact the Lemelson-MIT Program at lemelson_awards@mit.edu for more information or go to http://web.mit.edu/invent/a-prize.html. Celebrating its 20th year in 2014, the annual prize honors an outstanding mid-career inventor who is dedicated to improving our world through technological invention.