A new sensor technology could enable touchless displays that respond to moisture emitted by the human body. 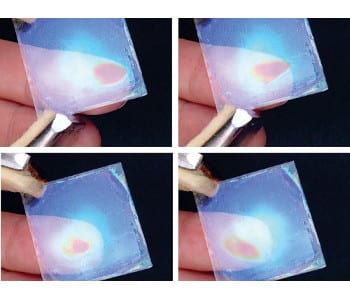 Touchscreens suffer from mechanical wear over time and are a transmission path for bacteria and viruses. A new touchless display may be able to use a human characteristic which is of vital importance, although sometimes unwanted: the fact that our body sweats.

Scientists of the Nanochemistry group led by Bettina Lotsch at the Max Planck Institute for Solid State Research in Stuttgart and the LMU Munich have now been able to visualize the transpiration of a finger with a special moisture sensor which reacts as soon as an object approaches its surface, without touching it. 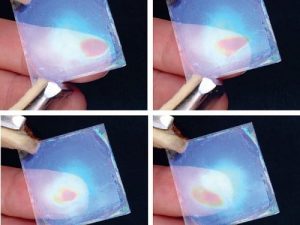 The colour changes when a finger reaches within a few millimetres of it (see below for a video).

Phosphatoantimonic acid is what enables it to do this. This acid is a crystalline solid at room temperature with a structure made up of antimony, phosphorous, oxygen and hydrogen atoms. “It’s long been known to scientists that this material is able to take up water and swells considerably in the process,” explained doctoral student Pirmin Ganter. This water uptake also changes the properties of the material. For instance, its electrical conductivity increases as the number of stored water molecules rises. This is what enables it to serve as a measure of ambient moisture.

“Because these sensors react in a very local manner to any increase in moisture, it is quite conceivable that this sort of material with moisture-dependent properties could also be used for touchless displays and monitors,” said Ganter. Touchless screens of this kind would require nothing more than a finger to get near the display to change their electrical or optical properties.

Taking phosphatoantimonate nanosheets as their basis, the Stuttgart scientists then developed a photonic nanostructure which reacts to the moisture by changing colour. “If this was built into a monitor, the users would then receive visible feedback to their finger motion” explained Katalin Szendrei, also a doctoral student in Bettina Lotsch’s group. To this end, the scientists created a multilayer sandwich material with alternating layers of ultrathin phosphatoantimonate nanosheets and silicon dioxide (SiO2) or titanium dioxide nanoparticles (TiO2). Comprising more than ten layers, the stack ultimately reached a height of little more than one millionth of a metre.

The scientists can imagine their materials being used in much more than just future generations of smartphones, tablets or notebooks. “Ultimately, we could see touchless displays also being deployed in many places where people currently have to touch monitors to navigate,” said Bettina Lotsch.

But before we see them being used in such places, the scientists have a few more challenges to overcome. It’s important, for example, that the nanostructures can be produced economically.