Adjusting the unit cell of a terahertz metamaterial relative to the diffraction order of its superlattice creates ultrahigh angular sensitivity.

Materials with periodic structures engineered on a subwavelength scale exhibit a negative refractive index, that is, they bend light around themselves in such a way as to render themselves, and any object they may conceal, apparently invisible to certain wavelengths. 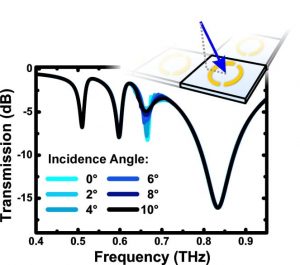 The potential uses of such materials—otherwise known as metamaterials—are being taken seriously. Between the domains of electronics and optics lies the terahertz regime, which is the particular target of a great deal of research. Structures targeting this regime can be created using standard photolithography, and very comprehensive characterisations of their electromagnetic properties can be readily carried out via time-domain spectroscopy. Once a structure has been generated for the terahertz regime, it can be up- or down-scaled in order to access the microwave or optical regimes, as desired.

Researchers collaborating across the world have now come up with a design methodology to generate metamaterials which interact strongly in order to achieve an ultrahigh angular sensitivity. By adjusting the dimensions of the metamaterial’s unit cell in relation to the diffraction order of its superlattice, they are able to enhance the sensitivity by several orders of magnitude.

By making the structure so sensitive to the angle of incident radiation, it is possible to exclude its undesired interaction with radiation incident from other directions, such as scattered light or light reflecting from objects other than an object of interest. This kind of directional filter will be useful to significantly improve the signal-to-noise ratio of detectors or sensor systems, for example, in astronomy applications, or to enhance the origin analysis of intercepted signals in various communication applications.