Diagnosing malaria in the field with accurate and portable rapid tests

A new lab-on-chip technology enables the rapid and quantitative identification of malaria parasites in the blood for better and more accurate diagnosis in remote regions. 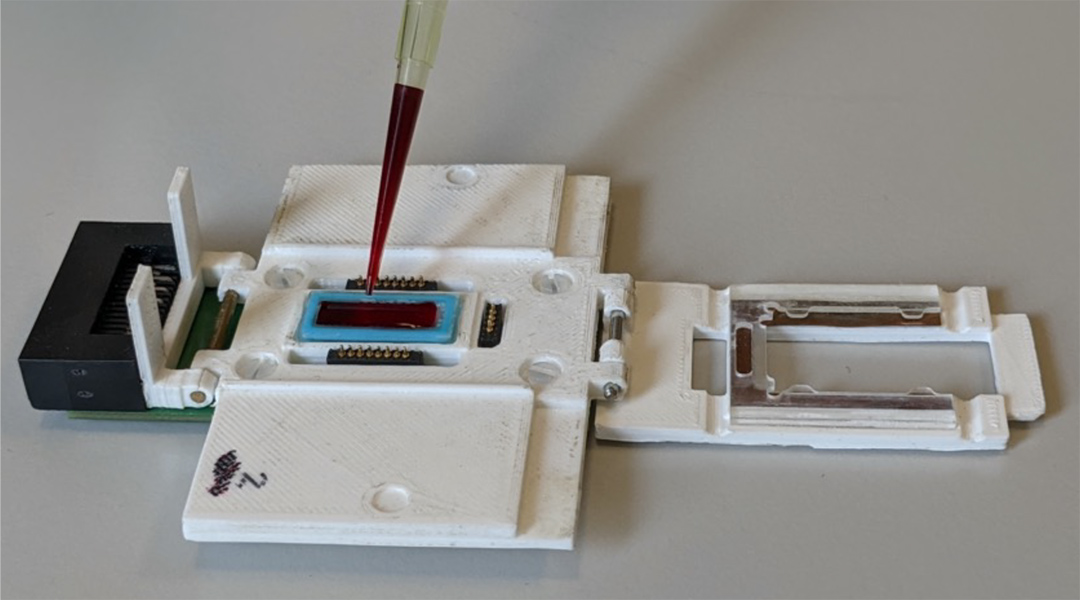 If you’ve been hearing more and more about “lab-on-a-chip” technology recently, it’s for good reason. These devices can be used to mimic organs, perhaps replace animal models in biomedical research, but ultimately, they have the ability to carry out a range of complex tests that were previous restricted to the lab, now contained in a single, low-cost, portable device.

Researchers like Riccardo Bertacco of the Politecnico di Milano see this as an effective tool for fighting debilitating diseases such as malaria, which is endemic in some parts of the world — 229 million new cases and 409,000 global deaths were reported in 2019 alone.

“I’ve known malaria since my stay in Cameroon 25 years ago as volunteer,” said Bertacco. “I got it at least twice and I directly experienced the tremendous personal, clinical, and societal impact of this infection, which affects 3.5 billion of people worldwide.”

With the current COVID-19 pandemic serving as a pressing example, rapid identification of infected individuals is an integral part of getting any infectious disease under control. In addition to the development of malaria vaccines, antimalarial drugs, and strategies to block transmission, diagnosing and treating individuals early is essential. The problem is, point-of-care identification of malaria is still a major challenge, especially in parts of the world where the disease is rampant and resources are limited.

“Lab-on-chips are appealing because they can be integrated on a small chip with biochemical and electronic functionalities, allowing the creation of automated smart devices that don’t require experienced personnel to run them,” said Lorenzo Pietro Coppadoro, a Ph.D. student in the Department of Electronics Bioengineering and Informatics of Politecnico di Milano. “With excellent sensitivity and [the ability] to make results available to clinicians via the internet, [this could] enable a remote healthcare system with sizable reduction of costs and improvement of quality.”

Leveraging the magnetism of infected cells

In 2016, Bertacco says he came across scientific publications describing the magnetic properties of red blood cells that had been infected by the malaria parasite Malaria Plasmodium. This triggered an interest in malaria from a unique viewpoint: that of a physics professor studying nanomagnetism.

“I thought to myself, ‘If malaria infected red blood cells are magnetic, then that’s [essentially] my job’, and the idea for a novel lab-on-chip diagnostic test based on this concept of magnetism came about,” said Bertacco.

The malaria parasite survives by feeding off hemoglobin, an oxygen-carrying protein complex found in red blood cells. One of the byproducts of this breakdown is the release of iron-containing heme (a substructure in hemoglobin), which the parasite converts into an insoluble crystal called hemozoin to protect itself from being poisoned. Since each heme contains one atom of iron, the hemozoin becomes paramagnetic — and detectable.

Bertacco and his collaborators named their device TMek, which comes from “Tid Mekii” meaning”malaria” in the local language of a small village called Mbalmayo in Cameroon where a preclinical validation was carried out.

“TMek is based on a microchip implementing the selective magnetic capture of infected red blood cells and free hemozoin crystals in a whole blood sample,” explained Professor Giorgio Ferrari, one of the study’s authors. “Healthy red blood cells sediment under the action of gravity, while infected, [magnetic] red blood cells are captured on some micro-magnets fabricated on the chip.”

The magnets upon which the infected red blood cells become trapped are built on top of electrodes. As infected cells build up, the impedance measured by the electrodes increases proportionally.

“The microchip is thus capable of capturing infected red blood cells and free pigment in a whole blood smear and quantifying their concentration using an electrical detection in just 5-10 minutes, with a limit of detection of 10 parasites/μl,” added Ferrari.

This is a significant achievement given the current landscape and limitations of rapid tests that are currently available for malaria. “The WHO strongly supports the use of rapid diagnostic tests based on the detection of antigens of Plasmodium in a blood smear,” explained Professor Spinello Antinori, another of the study’s authors. “However, available rapid tests still have a relatively high limit of detection (roughly 200 parasites/μl), an operating time of 15-20 minutes, and are purely qualitative and do not provide any quantification of the level of parasitaemia.”

Antinori also notes that sub-optimal performance of the rapid tests has led to a significant number of false positive and negative results. More sensitive tests, such as PCR, help to bridge some of these limitations, however, they still require almost 60 minutes to run, are not quantitative (which would help clinicians determine disease stage) and are not compatible for widespread use in the field.

“According to our preclinical validation carried out in Cameroon in April 2019,” said Francersca Milesi, a Ph.D. student in the Physics Department at Politecnico di Milano, “TMek represents a step forward, as its limit of detection is one order of magnitude lower of that of currently used rapid tests, while it holds potential to become a quantitative and stage-selective rapid test suitable for all malaria species.”

With the goal of reconciling their passion for scientific discovery with its ability to make real societal impact, the team has filed their device under a social patent, which ensures that any generated revenue is re-invested into similar research projects with high societal impact.

“[While working on TMek], I felt the extraordinary enthusiasm and commitment of young researchers working with me on this cutting-edge technology with the clear scope of using it in Africa,” said Bertacco. “I discovered the enormous potential of the collaboration with clinicians and laboratory technicians working at Mbalmayo, as they know malaria well and are fundamental actors in the fight against its eradication.”

In this context, the device could be groundbreaking, enhancing accuracy when tests such a optical microscopy or PCR are unavailable. “Our test represents an invaluable tool to identify healthy carriers in screening asymptomatic individuals,” added Professor Gianfranco Beniamino Fiore. “TMek could become the lab-on-chip equivalent of microscopy, providing clinicians with an easy, fast, and automatic tool for the quantitative assessment of the parasitemia, disease progression, and in assessing potential human-to-mosquito parasite transmissibility.”

There is also the potential to use it beyond malaria. “The concept of TMek, in principle, could be used to target other diseases, which produce alterations of the magnetic properties of biological [entities],” said Milesi. “One example could be schistosomiasis, where worms produce the same molecule (hemozoin) responsible for the change of the magnetic properties of red blood cells infected by malaria.”

“The test could be made available to patients in small medical centers in endemic zones, not equipped with relevant laboratory facilities and well experienced personnel, thus enabling reliable and fast diagnosis of malaria in the field [and remote areas],” concluded Fiore.