Using theoretical and experimental analysis, researchers aim to better understand the novel and intriguing magnetic properties of 2D materials for the next generation of information technologies. 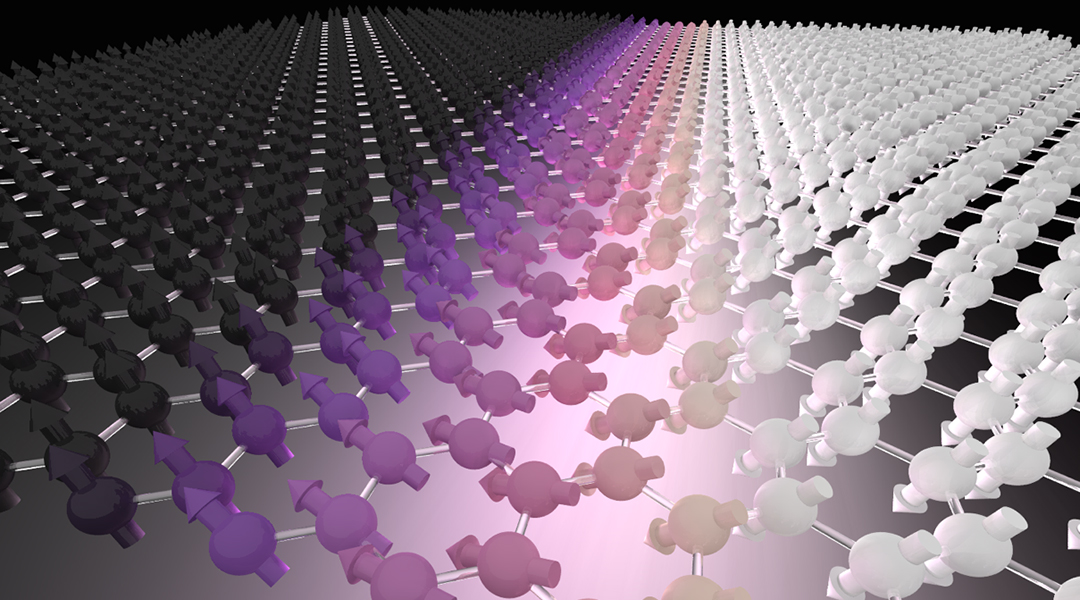 Since the discovery of graphene in 2004 — which won its inventors the Nobel Prize and launched a new field of materials research — two dimensional (2D) materials that are one atom thick have promised to revolutionize technology as a result of their unique and sometimes bizarre properties. However, one crucial property to data storage and electronics has, for a long time, remained elusive: magnetism.

For a while, many experts thought that 2D magnetism existed only in theory, but in 2017, a breakthrough came with the first measurements of ordered magnetism made in chromium triiodide (CrI3) and Cr2Ge2Te6. This discovery sparked renewed interest for which many unknowns still remain. “For one,” says Dr. Elton Santos from the University of Edinburgh, “it is still unclear how magnetism develops in 2D.”

Santos is part of a collaborative team of researchers who suggest that as a result of magnetic domains found in 2D CrI3, this material shows properties that may go beyond those found in conventional magnets with quantum effects playing an important role. The researcher’s findings were recently published in the journal Advanced Materials.

“The interplay between different interactions usually align the spins of the atoms in small spatial regions on the material, with different orientations forming what are called ‘magnetic domains’,” said Santos. “In the case of monolayer CrI3, however, we observed that the domains cluster themselves in patches that can be large enough to cover the material’s entire surface, like in a single-domain particle but with no magnetic fields.

“Materials that show such large area of magnetism can be used in different magnetic processes, such as information storage, but in a much finer fashion — in an area about 10,000 times thinner than the human hair.”

When first discovered in 2017, 2D materials like CrI3 were initially classified as Ising magnets, which is the simplest mathematical model that describes magnets as a honeycomb lattice of spins which can exist in one of two states: either spin up or spin down. Each spin acts like a mini magnet with its own magnetic moment; if all the spins are aligned, then the whole lattice behaves like a big magnet with a net magnetic moment.

But Santos and his colleagues felt this classification did not fully capture the properties of these materials, as they had observed some contradictory phenomena.

“CrI3 was assigned as an Ising magnet, but at the same time, it shows properties that would not be compatible with this characteristic, i.e., spin-waves — continuous variations of the orientation of the spins in a wave form,” said Santos. “Spin waves have been measured by different techniques, including neutron scattering and Raman spectroscopy, and by different groups worldwide. So, we thought something was not quite right.

“If you look in a solid-state textbook or even on Wikipedia, you will find that an Ising magnet cannot hold spin waves due to restrictions on the orientation of the spins. A quantum mechanical model on the other hand, where the spins can assume different orientations (i.e., Heisenberg) can be used to accurately describe it.”

What Santos and his group uncovered is a unique feature of domain walls within the 2D materials, which evolve as a result of the materials’ low dimensionality (or 2D nature).

“Incredibly, we determined that quantum effects actually stabilize the magnetic properties of CrI3 and allow domain walls, which are the boundaries between magnetic domains, to have chirality — a property of asymmetry where an object is distinguishable from its mirror image in space, like our left and right hands,” said Santos.

In conventional magnets, such as iron, the domain walls separate the magnetic domains, but they don’t change and are static in time.

“As a consequence of the 2D nature of the CrI3 layer,” he continued, “the magnetic domains in 2D CrI3 are not completely stable — that is, they keep evolving with time — so this induces a variation in the direction of the spins along the domain walls. We happened to observe this beautiful spin pattern changing orientation and we couldn’t resist looking deeper. That’s when we found out that even though CrI3 is only a few atoms in thickness, the width of the domain walls is characteristic of permanent magnets, such as nanometre-thick iron nanoparticles.”

The team is now working on the implementation of these thin magnets in different device-platforms. For instance, where the control of magnetic domain walls is mediated by electrical currents. Initially designed by Stuart Parkin and his team at IBM in 2008, this phenomenon was used to build what are called racetrack memories, which are organize data in a 3D microchip and may someday replace conventional data storage.

“We believe that the implementation of our findings in racetrack structures is a matter of time,” added Santos. “Since the domain wall is very narrow in these 2D magnets, it is ideal for such processes, and they can also be transferred on different surfaces which facilitates integration with current semiconductor components.

“This could result in devices that are practically unbreakable because the 2D material is so flexible, as well as light and thin enough to be carried around in your pocket but with the capacity to store thousands of huge files on the go. However, we need to be cautious since there is a long way to go before we reach that level in terms of applications.”