Organ-on-a-chip technology allows for the study of caffeine transport across the placenta to the fetus during pregnancy. 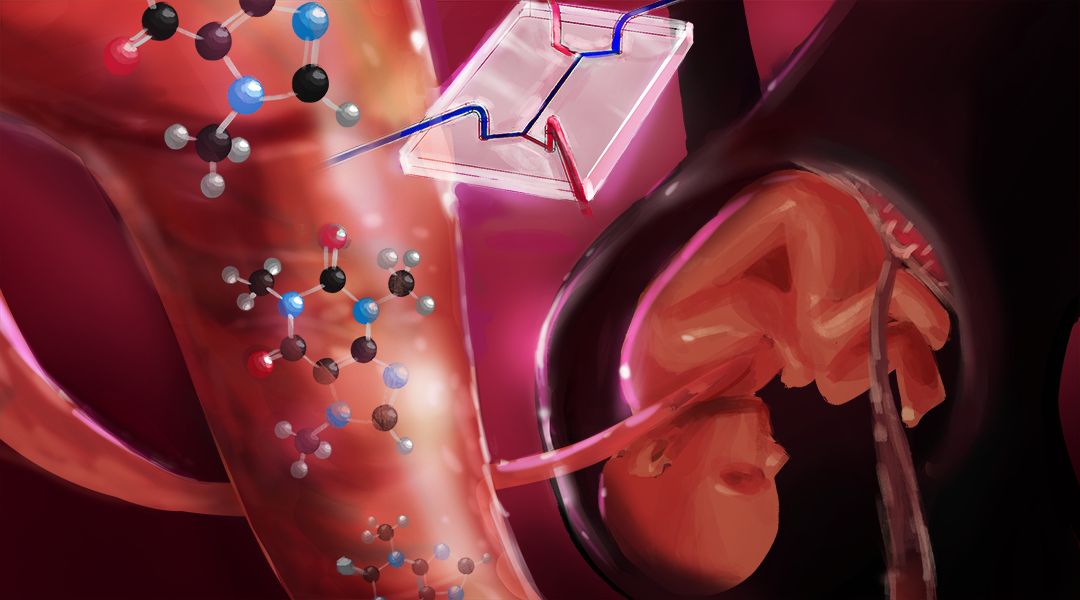 Many of us routinely rely on natural caffeine sources—coffee, tea, and cocoa—to start and propel us through the day. Food and beverages containing synthetic caffeine are popular alternatives, especially in the form of sugary energy drinks. A less conspicuous source of the stimulant is prescription and over-the-counter drugs, which sometimes contain caffeine as an adjuvant to enhance the medication’s effectiveness. As such, caffeine is widely consumed by the general population, including by pregnant women.

Because pregnant women metabolize caffeine more slowly than non-pregnant women, how caffeine consumption affects the fetus is a cause for concern. Fetuses lack the primary enzyme in the liver for caffeine metabolization, so the amount of caffeine transported across the placental barrier depends on the metabolization capability of the mother. This fact has led health authorities, including the World Health Organization (WHO) and the Food and Drug Administration (FDA), to develop recommendations restricting caffeine intake during pregnancy, but the potential effects of maternal caffeine intake on the fetus, either before and after birth, have so far been undetermined.

To investigate this global health issue, Prof. Nicole N. Hashemi from Iowa State University and her colleagues have developed a drug testing platform to study caffeine transport across the placental barrier in vitro. Previous studies have addressed this problem using in vivo or ex vivo research methods, yielding inconsistent results and demonstrating other drawbacks, such as ethical constraints and failure to replicate the entire physiological structure of the placenta, which differs from that of other mammals.

Using organ-on-a-chip technology to replicate the placenta is a difficult task because the organ’s existence is temporary, developing only during pregnancy and changing its structure and functionality over the course of the gestational period.

Hashemi and her colleagues have developed a placenta-on-a-chip system to accurately represent the maternal interface and the fetal interface in a human placenta. The design allows for co-culturing of endothelial and trophoblast cells in the microchip, which are the two most prominent cell lines in the human placental barrier. The microfluidic device develops confluent layers of endothelial and trophoblast cells, placental hormones, and other microphysiological properties.

Although several challenges must be overcome to further develop the model, this study acts as a proof of concept to verify that caffeine is transported across the placenta in vitro, warranting further studies that perfuse different caffeine concentrations across the placental barrier. Their model also provides a platform for examining the safety of drugs administered to pregnant women.

“Now that we have this model developed, we can use it to study the effects of different levels of caffeine and other drugs consumed by a mother on a fetus and its underdeveloped organs,” states Rajeendra Pemathilaka, a doctoral student in the Department of Mechanical Engineering at Iowa State University and first author of the publication.

César Rodriguez-Emmenegger: "Be passionate, creative, and bold"
The ongoing search for life on Venus
Synchronized movement in living systems
The next boost in lithium-ion battery research: Suppressing oxygen evolution