Detection of Explosives: An All-in-Fiber Chemical Sensor for Peroxide Vapors

Scientists report a new method for remote tracing of vapors escaping from the liquid-peroxide explosives used in terror bombing incidents. 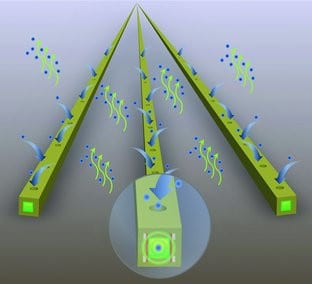 Liquid peroxide-based explosives (PBEs) found their way into the world-wide news in a number of incidents involving bombing attacks on public transport systems. To detect PBEs, optical fibers that contain luminescence-based sensors are used. The photoconductive structure of the sensor detects a chemiluminescent signal from the reaction of the sensing material with peroxide vapors. The resulting optical signal is then transmitted along the optical fiber towards a photodetector at the fiber end.

One of the limitations of current state-of-the-art hydrogen peroxide vapor sensors is the detection over large areas, which is challenged by limitations on coupling efficiency and propagation losses along the optical fiber. 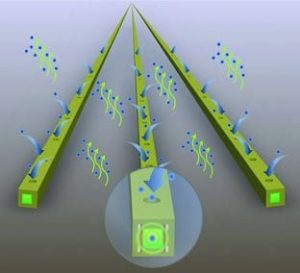 Professor Yoel Fink and his team at the Massachusetts Institute of Technology (USA) have now reported an advanced detection method that allows for remote tracing of peroxide vapors. Rather then propagating the optical signal to a distant detector at the fiber end, photodetectors are an integral part of the fiber itself along its entire length. Photoconductive structures flank the hollow core of the fiber and detect chemiluminescence from the reaction of the sensing material with peroxide vapors that flow through the fiber core.

These all-in-fiber photodetection structures can be hundreds of meters long, allow for scalable manufacturing, and are compatible with miniaturized electronics, suggesting applications in remote and distributed sensing schemes that meet current security needs. At the same time, the trace-level detection down to 10 parts per billion is on par with currently used sensors for non-remote detection. In the future, the potential for multiplexing (creating multiple microfluidic channels in multimaterial fibers) may even allow for intrafiber multipurpose detection.