A simple way to identify the number of graphene sheets on a substrate, even over a large area, is shown by US researchers. 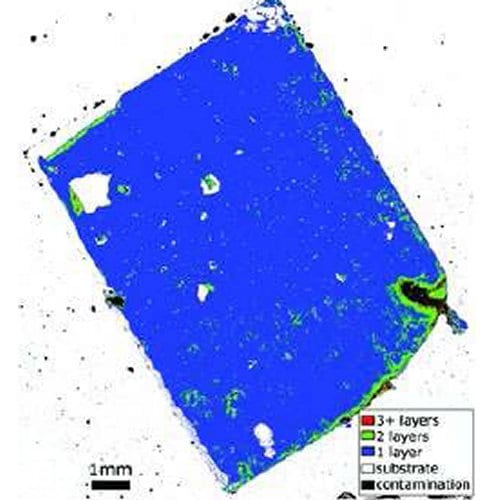 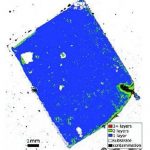 A simple way to identify the number of graphene sheets on a substrate, even over a large area, is shown by US researchers.

Graphene is the much-loved material of-the-moment; the most recent Nobel Prize for physics was awarded to Andre Geim and Kostya Novoselov for work in this area and many researchers are following in their footsteps to investigate the exciting electric, optical, and mechanical properties of graphene. But even just identifying that you have produced a graphene sheet, and how many you have made, can be tricky.

Industrial production of graphene is usually by chemical vapor deposition (CVD) rather than by the mechanical exfoliation method (tearing off sheets from a block of graphite) much used in early work. CVD-grown sheets can be relatively very large, which is good for many industrial applications, but this method does induce some defects and wrinkles which can be hard to spot, as well as producing multiple layers of sheets. Raman and atomic force microscopy can be used to count sheets on silica or silicon but these techniques call for calibration and can only cover a small area at a time; this is not ideal for the large areas of graphene produced by CVD. As its uses expand, graphene is being made and used on a variety of substrates so it would be useful to have a method of counting that is not confined to use on only a small number of surfaces.

Researchers at University of California, Riverside, USA, led by Cengiz Ozkan and Mihrimah Ozkan have developed a method for quick and easy identification of layer thickness and uniformity of entire large-area graphene sheets on arbitrary substrates. They exploit the fact that graphene quenches fluorescence whereas most substrates do not, and coat an area of graphene on a surface with a fluorescent polymer dye to allow visualization with a simple fluorescence microscope. Straightforward data processing of this input identifies not only the presence but also the number of layers of graphene present in any one area. Uniformity of the sample and defects can also be assessed by this route.

The scientists went on to test their method by looking at different ways of transferring graphene from one substrate to another, and the resulting quality of the final sheets. They were able to tell the most effective method used to transfer graphene and preserve sheet quality.