Wunenburger and coworkers at the University of Bordeaux and the CNRS have used millifluidics to create hard core-soft shell microparticles. 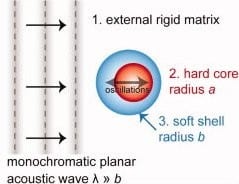 Transporting the many interesting properties of metamaterials (which can alternatively be used as super lenses, cloaking materials, waveguides, as well as for many other applications) from electromagnetic waves to acoustic waves has stimulated much research in recent years. There are, however, numerous fabrication issues to solve on the way to produce a three-dimensional version of such materials, especially for ultrasonic frequencies. One particular set of resonators that scientists have focused on are hard core-soft shell microparticles, but those too are difficult to make, at least with the dimensions and characteristics required for this application.

Now, Wunenburger and coworkers at the University of Bordeaux and the CNRS, in a recent paper published in the Journal of Applied Polymer Science, have used millifluidics, in which fluids move around in channels of sub-millimeter size, to self-assemble particles with a diameter of around half a millimeter, starting from hard poly(methylmethacrylate) particles with a diameter roughly five times smaller. The soft shell is made of an agarose hydrogel. Different alternatives for the production of the particles, starting from solid cores and gelling the shell using an immiscible carrier fluid, or starting from liquid cores which are polymerized in situ and thus trigger the gelation of the shell, are shown. 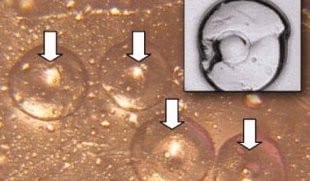 While core-shell microparticles have been made many times before, Wunenburger says that “the technical solutions shown in this paper, from injection of non-Brownian solid particles into microchannels using first an iso-density injection stage and then a dilution stage, the control of a two-phase co-flow with simultaneous polymerization, and the diffusion-based control of in-line polymerization, are innovative”. This fabrication method could in perspective provide the kind of resonators necessary to move acoustic metamaterials into ultrasonic frequencies.

Metamaterial Improves Solar Cells
Gentle laser processing of perovskites at the nanoscale
Expanding the Capabilities of IR Spectroscopy
Computational electromagnetics: Know your tools for they shape our future