Researchers adapt mobile phones and smart phones to the carrying habits of their users. 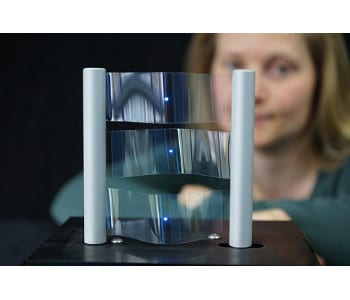 This much is clear to anyone who has tried sitting down with a mobile phone in their back pocket: the displays of the innumerable phones and pods are rigid and do not yield to the anatomical forms adopted by the people carrying them.

By now it is no longer a secret that the big players in the industry are working on flexible displays. Properties that suitable coatings offer in this respect have been demonstrated by researchers at the INM – Leibniz-Institute for New Materials.

The INM group found nanoparticle inks that can be printed directly onto thin plastic films by simple processes. Gravure printing is used to form transparent conductor tracks and structures, which still remain electrically conductive even when the films are deformed.

For the nanoparticle inks, the researchers use what are known as TCOs, or transparent conducting oxides. “We use the TCOs to produce nanoparticles with special properties”, says Peter William de Oliveira, Head of the Optical Materials Program Division, “the TCO ink is then created by adding a solvent and a special binder to these TCO particles”.

The binder performs several tasks here: it not only makes the TCO nanoparticles adhere well on the film; it also increases the flexibility of the TCO coating: in this way, the conductivity is maintained even when the films are bent. The ink can then be applied to the film directly by gravure printing using a printing plate. After curing under UV light at 150°C, the coating is ready.

The transparent electronic inks allow conductor tracks to be produced unproblematically even on a large-scale by means of the classic reel-to-reel process. Initial trials at INM have been promising. The researchers all agree that the use of structured rollers will in the future allow even large, structured conductive surfaces to be printed with a high throughput at low cost. Conductive coatings with TCOs are usually applied by means of high vacuum techniques. The method known as sputtering, however, is very expensive.