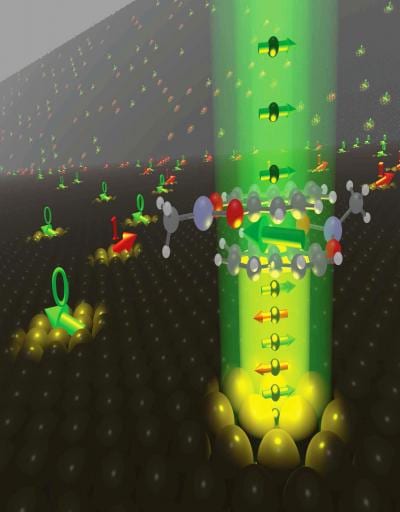 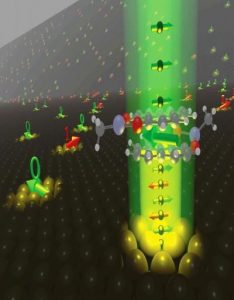 The layer system of cobalt (bottom) and organic molecules can serve to store magnetic information that is indicated in the image by ones and zeros. The green and red arrows show the orientation of the spin. Image: Forschungszentrum Jülich.

An international team of researchers has found a new method of producing molecular magnets. Their thin layer systems made of cobalt and an organic material could pave the way for more powerful storage media as well as faster and more energy-efficient processors for information processing. The results of this research have been published in the current issue of Nature.

In order to boost the performance of computers and reduce their energy requirements, processors and storage media have become smaller and smaller over the years. However, this strategy is about to reach the limits imposed by physics. Components that are too small are unstable, making them unsuitable for secure data storage and processing. One reason is that even one atom more or less can change the physical properties of components significantly that consist of only a few atoms. However, the exact number and arrangement of atoms can hardly be controlled in metals and semiconductors – the materials that electronic device components are made of today.

One way out of this dilemma could be so-called “molecular electronics”, with nanometre-scale components made up of molecules. Molecules consist of a fixed number of atoms, can be designed specifically for various purposes, and can be produced cost-effectively in an identical form over and over again. If the magnetic moment of the electron – the “spin” – is also exploited in addition to its electric charge, it looks as though it may even be possible to implement entirely new functionalities, such as non-volatile RAM or quantum computers.

Molecules for such “molecular spintronics” must have specific magnetic properties. However, these properties are very sensitive and, so far, frequently become lost if the molecules are attached to inorganic materials, which are required for conducting electric current. This is why a team of researchers from Forschungszentrum Jülich, the University of Göttingen, Massachusetts Institute of Technology in the USA, Ruđer Bošković Institute in Croatia and IISER Kolkata in India pursued a new strategy exploiting the unavoidable interactions between the molecules and their substrate in a targeted manner to produce a hybrid layer that exhibits molecular magnetism and has the desired properties.

The researchers applied zinc methyl phenalenyl, or ZMP for short, a small metalorganic molecule which in itself is not magnetic, onto a magnetic layer of cobalt. They showed that ZMP forms a magnetic “sandwich” only in combination with the cobalt surface and that it can be selectively switched back and forth between two magnetic states using magnetic fields. In this process, the electrical resistance of the layer system changes by more than 20 %. In order to produce these “magnetoresistive” effects necessary to store, process, and measure data in molecular systems, researchers often required temperatures well below -200 °C.

“Our system is highly magnetoresistive at a comparatively high temperature of -20 °C. This is a considerable step forward on the way to developing molecular data storage and logic elements that work at room temperature,” says Jülich scientist Dr. Nicolae Atodiresei, a theoretical physicist at the Peter Grünberg Institute and the Institute for Advanced Simulation. He and his Jülich colleagues played a major role in developing a physical model that explains the properties of this material with the help of calculations on supercomputers at Forschungszentrum Jülich.

“We now know that it is necessary for the molecule to be practically flat,” says Atodiresei. “Two molecules then form a stack and attach themselves closely to the cobalt surface. The cobalt and the lower molecules then form the magnetic sandwich, while the upper molecule serves as a ‘spin filter’ and allows primarily those electrons to pass whose spin is suitably oriented.” The orientation can be controlled by means of a magnetic field, for example. On the basis of their findings, the researchers are now planning to further optimize their sandwich system and modify it in such a way that the filter effect can also be controlled by electrical fields or light pulses.